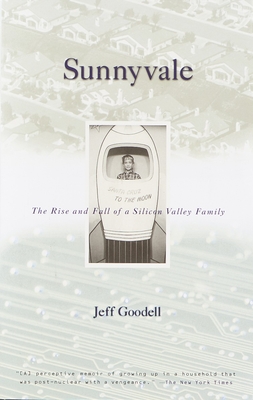 The Rise and Fall of a Silicon Valley Family

In Sunnyvale, California, in 1979, Jeff Goodell's family lived quietly on Meadowlark Lane, unaware that their town was soon to become ground zero in the digital revolution. Over the course of the next decade, as Silicon Valley boomed, the Goodell family unraveled.

Splintered by their parent's divorce, Jeff and his siblings careen toward self-destruction, while their parents end up on opposite sides of the technological divide: their mother succeeds beyond her wildest dreams at "a small company with a dopey rainbow-colored logo," called Apple, while their father refuses to keep up with the times and loses his landscaping business. Affecting and personal, Sunnyvale is a portrait of one family's fate in a brutally Darwinian world. It is also a thoughtful examination of what has happened to the American family in the face of the technological revolution.

Praise For Sunnyvale: The Rise and Fall of a Silicon Valley Family…

“A perceptive memoir of growing up in a household that was post-nuclear with a vengeance.”–The New York Times

Jeff Goodell is the author of The Cyberthief and the Samurai. He is a contributing editor at Rolling Stone, and his work has appeared in The New York Times Magazine, The New Republic, Wired, and GQ. A fourth-generation Californian, he now lives in upstate New York. He can be e-mailed at jg@well.com.
Loading...
or support indie stores by buying on