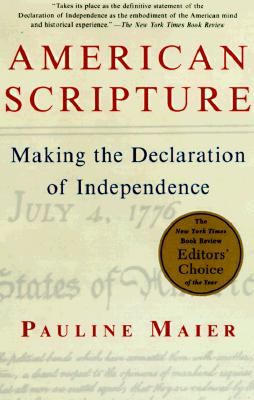 Making the Declaration of Independence

Pauline Maier shows us the Declaration as both the defining statement of our national identity and the moral standard by which we live as a nation. It is truly "American Scripture," and Maier tells us how it came to be -- from the Declaration's birth in the hard and tortuous struggle by which Americans arrived at Independence to the ways in which, in the nineteenth century, the document itself became sanctified.

Maier describes the transformation of the Second Continental Congress into a national government, unlike anything that preceded or followed it, and with more authority than the colonists would ever have conceded to the British Parliament; the great difficulty in making the decision for Independence; the influence of Paine's Common Sense, which shifted the terms of debate; and the political maneuvers that allowed Congress to make the momentous decision.

In Maier's hands, the Declaration of Independence is brought close to us. She lets us hear the voice of the people as revealed in the other "declarations" of 1776: the local resolutions -- most of which have gone unnoticed over the past two centuries -- that explained, advocated, and justified Independence and undergirded Congress's work. Detective-like, she discloses the origins of key ideas and phrases in the Declaration and unravels the complex story of its drafting and of the group-editing job which angered Thomas Jefferson.

Maier also reveals what happened to the Declaration after the signing and celebration: how it was largely forgotten and then revived to buttress political arguments of the nineteenth century; and, most important, how Abraham Lincoln ensured its persistence as a living force in American society. Finally, she shows how by the very act of venerating the Declaration as we do -- by holding it as sacrosanct, akin to holy writ -- we may actually be betraying its purpose and its power.

Praise For American Scripture: Making the Declaration of Independence…

"Splendid. Maier skillfully traces the progress of the Declaration from political event to sacred text."--Washington Post


"Sharp and engaging...A meticulous exhumation of American history that is full of fascinating details and scintillating insights."--San Francisco Chronicle


"Gary Wills, stand aside. Pauline Maier has given us the freshest, best-informed historian's reading of the Declaration of Independence and its context that we have ever had. American Scripture enables us to see just how this sacred text was created, and the ways in which it was unique. It is a remarkable achievement!"
-- Richard D. Brown, University of Connecticut


"Pauline Maier renders unto Jefferson that which is Jefferson's, but she tells a much larger story. She shows what made the Declaration possible and necessary, considers its lineage, probes its genesis in a time of extreme turmoil, and reflects on its continuing living meaning, achieving all of this in very elegant prose."
-- Edward Countryman, Southern Methodist University


"Quite simply the fairest, fullest, and finest account ever written of how the Declaration of Independence happened."
-- Joseph J. Ellis, Mount Holyoke College


"Until I read Pauline Maier's remarkable new book, I thought I knew all I needed to know about the Declaration of Independence. But her deft, lively analysis punctures the received mythology and gives us an entirely original interpretation of our founding document."
-- J. Anthony Lukas, author of Common Ground

Pauline Maier was born in St. Paul, Minnesota.  She received her B.A. from Radcliffe College in 1960, was a Fulbright Scholar at the London School of Economics in 1960-61, and took her Ph.D. at Harvard University in 1968.  She has taught at Harvard, the University of Massachusetts (Boston), University of Wisconsin, Yale University, and Massachusetts Institute of Technology, where she has been William R. Kenan, Junior, Professor of American History since 1990.  She is the author of From Resistance to Revolution, The Old Revolutionaries, and The American People: A History, a single-authored text for junior high school, as well as numerous other articles and reviews.
Loading...
or
Not Currently Available for Direct Purchase