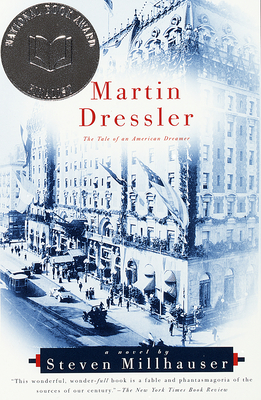 The Tale of an American Dreamer (Vintage Contemporaries)

Winner of the Pulitzer Prize and National Book Award Finalist

Young Martin Dressler begins his career as an industrious helper in his father's cigar store.  In the course of his restless young manhood, he makes a swift and eventful rise to the top, accompanied  by two sisters--one a dreamlike shadow, the other a worldly business partner. As the eponymous Martin's vision becomes bolder and bolder he walks a haunted line between fantasy and reality, madness and ambition, art and industry, a  sense of doom builds piece-by-hypnotic piece until this mesmerizing journey into the heart of an American dreamer reaches its bitter-sweet conclusion.

Praise For Martin Dressler: The Tale of an American Dreamer (Vintage Contemporaries)…

"This wonderful, wonder-full book is a fable and phantasmagoria of the sources of our century."--The New York Times Book Review

"The novel is told as a fable, with prose both lush and dreamlike. The characters are intentionally rather shadowy, while the period details- of building construction, interior design, dress styles, street scenes--have a sensuality so palpable you can practically chew on them."--The Wall Street Journal

"A Chronicle of obsession, self-indulgence, and, in a curious way, moral growth, expertly poised between realistic narrative and allegorical fable.... A fascinating and provocative portrayal of turn-of-the-century America that hums with energy and wit." --Kirkus Reviews

"Literature's romance with building-as-metaphor earns new energy through Millhauser's latest novel...which quietly chronicles the life of an entrepreneur whose career peaks when he builds a fabulous hotel.... Taking its place alongside other fine tales of architectural symbology, from Poe to Ayn Rand, this enticing novel becomes at once a tale of life, a marriage and a creative imagination in crisis." --Publishers Weekly

Steven Millhauser is the author of numerous works of fiction, including Martin Dressler, which was awarded the Pulitzer Prize in 1997, and, most recently, Dangerous Laughter, a New York Times Book Review Best Book of the Year. His work has been translated into fifteen languages, and his story “Eisenheim the Illusionist” was the basis of the 2006 film The Illusionist. He teaches at Skidmore College and lives in Saratoga Springs, New York.
Loading...
or support indie stores by buying on