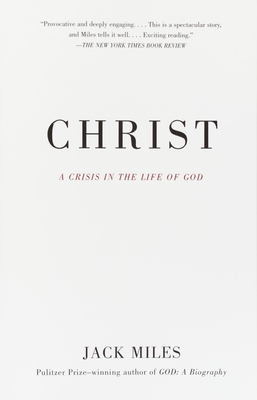 A Crisis in the Life of God

With the same passionate scholarship and analytical audacity he brought to the character of God, Jack Miles now approaches the literary and theological enigma of Jesus. In so doing, he tells the story of a broken promise–God’s ancient covenant with Israel–and of its strange, unlooked-for fulfillment. For, having abandoned his chosen people to an impending holocaust at the hands of their Roman conquerors. God, in the person of Jesus, chooses to die with them, in what is effectively an act of divine suicide.
On the basis of this shocking argument, Miles compels us to reassess Christ’s entire life and teaching: His proclivity for the powerless and disgraced. His refusal to discriminate between friends and enemies. His transformation of defeat into a victory that redeems not just Israel but the entire world. Combining a close reading of the Gospels with a range of reference that includes Donne, Nietzche, and Elie Wiesel, Christ: A Crisis in the Life of God is a work of magnificent eloquence and imagination.

Jack Miles is a writer whose work has appeared in numerous national publications, including The Atlantic Monthly, the The New York Times, The Boston Globe, The Washington Post, and The Los Angeles Times, where he served for ten years as literary editor and as a member of the newspaper’s editorial board. The recipient of a Ph.D. in Near Eastern languages from Harvard University and a former Jesuit, he has been a Regents Lecturer at the University of California, director of the Humanities Center at Claremont Graduate University, and visiting professor of humanities at the California Institute of Technology. His first book, God: A Biography, won a Pulitzer Prize and has been translated into fifteen languages. Currently senior advisor to the president of the J. Paul Getty Trust, a foundation supporting art and scholarship, Dr. Miles lives with his wife and daughter in Southern California.

Praise For Christ: A Crisis in the Life of God…

“Provocative and deeply engaging. . . . This is a spectacular story, and Miles tells it well. . . . Exciting reading.” --The New York Times Book Review

“No one who reads it will be able to think about even the most familiar Biblical scenes in quite the same way.” --Newsday

“The brilliance of Jack Miles's new book on Christ is that it manages to "make strange" the best-known story in history. . . . Stratlingly original.” —The New Statesman

“As a way of seeing [God], Miles’s book has great power and depth.” --The New Yorker
or support indie stores by buying on
Copyright © 2020 American Booksellers Association