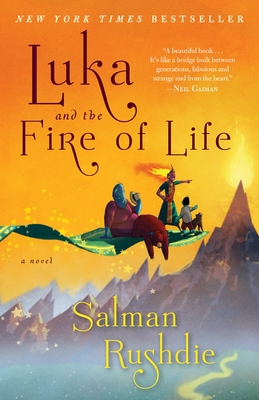 Luka and the Fire of Life

“Why ever do we read and tell those old tales of gods and godesses? Those has-beens are utterly silly! But Luka finds he needs them to save his father -- the Shah of Blah -- from his endless torpor. Master storyteller Rushdie wonderfully and delightfully reminds us why we need our stories, and of the sheer pleasure of words, upon words, upon words.”
— Lauren Losaw, The Bookloft, Great Barrington, MA
View the List

“You’ve reached the age at which people in this family cross the border into the magical world. It’s your turn for an adventure—yes, it’s finally here!” So says Haroun to his younger brother, twelve-year-old Luka. The adventure begins one beautiful starry night in the land of Alifbay, when Luka’s father, Rashid, falls suddenly into a sleep so deep that nothing and no one can rouse him. To save him from slipping away entirely, Luka embarks on a journey through the world of magic with his loyal companions, Bear, the dog, and Dog, the bear. Together they encounter a slew of fantastical creatures, strange allies, and challenging obstacles along the way—all in the hope of stealing the Fire of Life, a seemingly impossible and exceedingly treacherous task.


Praise For Luka and the Fire of Life: A Novel…

“Riddles, puns and other wordplay enliven the writing. . . . The charm and cleverness of this buoyant fantasy will draw you into its Magical World.”—Minneapolis Star Tribune

NAMED ONE OF THE BEST BOOKS OF THE YEAR BY
Maggie Galehouse, NPR • The Kansas City Star

Salman Rushdie is the author of ten previous novels—Grimus, Midnight’s Children (for which he won the Booker Prize and, recently, the Booker of all Bookers), Shame, The Satanic Verses, Haroun and the Sea of Stories, The Moor’s Last Sigh, The Ground Beneath Her Feet, Fury, Shalimar the Clown, and The Enchantress of Florence—and one collection of short stories, East, West. He has also published three works of nonfiction—The Jaguar Smile, Imaginary Homelands: Essays and Criticism 1981-1991, and Step Across This Line—and co-edited two anthologies, Mirrorwork and Best American Short Stories 2008. He is a former president of American PEN.
Loading...
or
Not Currently Available for Direct Purchase