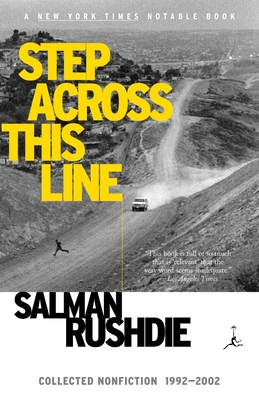 Step Across This Line

For all their permeability, the borders snaking across the world have never been of greater importance. This is the dance of history in our age: slow, slow, quick, quick, slow, back and forth and from side to side, we step across these fixed and shifting lines. —from Part IV

With astonishing range and depth, the essays, speeches, and opinion pieces assembled in this book chronicle a ten-year intellectual odyssey by one of the most important, creative, and respected minds of our time. Step Across This Line concentrates in one volume Salman Rushdie’s fierce intelligence, uncanny social commentary, and irrepressible wit—about soccer, The Wizard of Oz, and writing, about fighting the Iranian fatwa and turning with the millennium, and about September 11, 2001. Ending with the eponymous, never-before-published speeches, this collection is, in Rushdie’s words, a “wake-up call” about the way we live, and think, now.

Praise For Step Across This Line: Collected Nonfiction 1992-2002…

“This book is full of so much that is ‘relevant’ that the very word seems inadequate.” —Los Angeles Times

“The essays crackle with [Rushdie’s] enthusiasm, humor, and intelligence.” —The Miami Herald

“Every reader will find at least one essay in this collection that will bring anger and one that will cause audible laughter—and that is what makes Rushdie such an intelligent critic and thought-provoking writer.” —Rocky Mountain News

“Step Across This Line . . . became my favorite reading this summer. . . . [Rushdie’s essays] mostly celebrate the blurriness of our characters, whether national, religious, or personal, often taking a smudge stick to such boundaries.” —Mary Karr, author of Cherry and The Liars’ Club

“[Rushdie’s] turns and words are frequently exhilarating. There is . . . lilting pleasure in the collection.” —The New York Times Book Review

Salman Rushdie is the award-winning author of eight novels: Fury, The Ground Beneath Her Feet, The Moor’s Last Sigh, Midnight’s Children (for which he won the Booker Prize and the “Booker of Bookers”), Shame, The Satanic Verses, Grimus, and Haroun and the Sea of Stories; one collection of short stories, East, West; a book of reportage, The Jaguar Smile, and an earlier collection of essays, Imaginary Homelands. He lives in New York and London.
Loading...
or
Not Currently Available for Direct Purchase