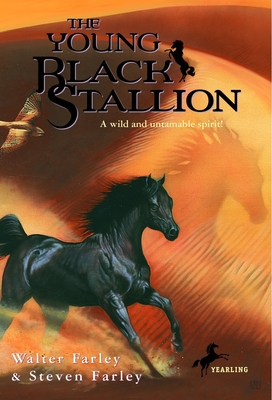 In this prequel to The Black Stallion, we learn the story of the Black before he was shipwrecked with Alec Ramsay. Born in the mountain stronghold of Sheikh Abu Ishak, the colt shows great promise. During a band of robbers’ attempt to steal him, the colt escapes and learns to survive on his own in the high mountains. Will he ever find his way home?

Walter Farley's first book, The Black Stallion, was an instant hit when it appeared in 1941. Mr. Farley went on to write thirty-three other enormously popular books about the Black Stallion and other horses which were published in more than twenty countries. He died in 1989, shortly before the publication of his last novel, The Young Black Stallion, written with his son Steven.

Steve Farley is the son of Walter Farley, the man who created the Black Stallion and wrote 20 stories about the best-loved literary horse of all time. A freelance writer based in Manhattan, Steve travels frequently, especially to places where he can enjoy riding, diving, and surfing.
Loading...
or
Not Currently Available for Direct Purchase