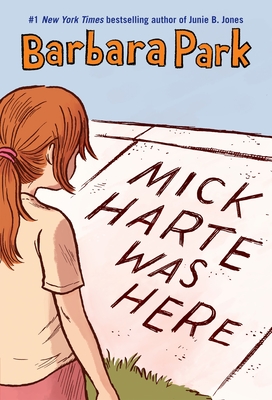 Phoebe’s brother, Mick, was one of the funniest, coolest kids you’d ever meet—the kid who made you laugh until your stomach hurt, even if you were mad at him. The kid who freaked his and Phoebe’s mom out by putting a ceramic eye in a defrosted chicken; who went trick-or-treating as Thomas Crapper, the inventor of the modern-day flush toilet; who did a wild solo dance in front of the entire school. He was the kid you’d want to be friends with. So how can he be gone? And how will Phoebe’s family survive without him?

For the Review section (please add the two reviews and the state awards below):
“A very moving story about a terrific 12-year-old boy. By the end of the book, readers miss him, too.” —Kirkus Reviews

“Park skillfully interweaves humor and pain in this unique, utterly believable account of Phoebe’s attempt to cope with a heartbreaking loss.” —The Horn Book


Praise For Mick Harte Was Here…

BARBARA PARK (1947–2013) is beloved by millions as the author of the wildly popular New York Times bestselling Junie B. Jones books, which have been translated into multiple languages and are time-honored staples in elementary school classrooms around the world. She is also the author of award-winning middle grade novels and bestselling picture books, including Skinnybones, Almost Starring Skinnybones, Mick Harte Was Here, and The Kid in the Red Jacket.