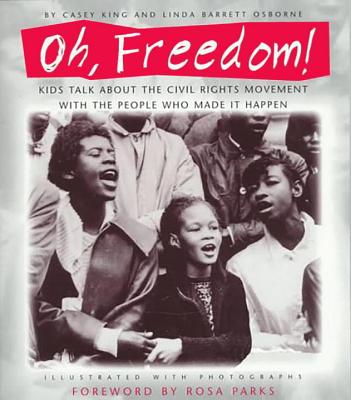 Now in paperback--a personal look at the civil rights movement of the 1950s and '60s told through dozens of interviews conducted by Washington, D.C., fourth graders with their parents, grandparents, neighbors, and others who helped fight the battle against segregation and changed the course of history. With a foreword by Rosa Parks, three introductory essays, and over 40 archival photographs, this thoughtful, compelling, and educational book pays tribute to the many ordinary people who dedicated themselves to the cause of freedom and the fight for equality.

Praise For Oh, Freedom!: Kids Talk About the Civil Rights Movement with the People Who Made It Happen…

"This book is important for the stories it tells, the pictures it shows, and especially for its prevailing message."--School Library Journal (starred review)

"This is must reading for all who are interested in America's struggle for racial justice, then and now."--Henry Louis Gates, Jr.

Casey King is a writer and an award-winning documentary filmmaker who founded the Tanner Film Group, a nonprofit organization dedicated to promoting racial harmony through the media. He has taught in Washington, DC, schools.

Linda Barrett Osborne is an award-winning short story writer, an editor, and a book reviewer for both The Washington Post and the New York Times. She has written This Land is Our Land, Traveling the Freedom Road, Miles to Go for Freedom, Come on In, America, and many more.
Loading...
or
Not Currently Available for Direct Purchase