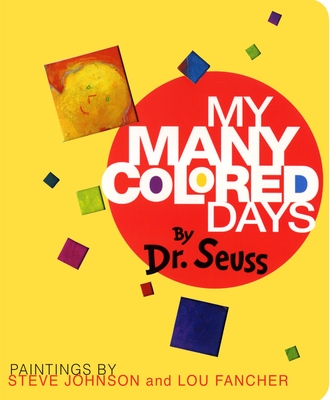 My Many Colored Days

Dr. Seuss's youngest concept book is now available in a sturdy board book for his youngest fans! All of the stunning illustrations and imaginative type designs of Steve Johnson and Lou Fancher are here, as are the intriguing die-cut squares in the cover. A brighter, more playful cover design makes this board book edition all the more appropriate as a color concept book to use with babies or a feelings and moods book to discuss with toddlers.

Dr. Seuss was born Theodor Geisel in Springfield, Massachusetts on March 2, 1904.  After attending Dartmouth College and Oxford University, he began a career in advertising.  His advertising cartoons, featuring Quick, Henry, the Flit!,  appeared in several leading American magazines.  In 1957, Seuss's The Cat in the Hat became the prototype for one of Random House's best- selling series, Beginner Books.  This popular series combined engaging stories with outrageous illustrations and playful sounds to teach basic reading skills.  Brilliant, playful, and always respectful of children, Dr. Seuss charmed his way into the consciousness of four generations of youngsters and parents.  In the process, he helped kids learn to read.  Winner of the Pulitzer Prize in 1984 and two Academy Awards, Seuss was the author and illustrator of 44 children's books, some of which have been made into audiocassettes, animated television specials, and videos for children of all ages.  Even after his death in 1991, Dr. Seuss continues to be the best-selling author of children's books in the world.

Steve Johnson was born in White Bear Lake, Minnesota and earned a B.F.A. in illustration from the School of Associated Arts in St. Paul, Minnesota. Steve's stunning illustrations have been seen in many magazines, but it was not until Knopf asked him to illustrate No Star Nights in 1989 that he began his career as a children's book illustrator. Since then, Steve and his wife Lou Fancher has collaborated on the illustrations and design on a number of notable children's books.  They are currently among the most sought after of children's book artists.  Steve and Lou fell in love with the My Many Colored Days manuscript at first sight, seeing in it an unusual opportunity to create something that is at once both childlike and sophisticated.  Steve and Lou currently reside in Minneapolis, Minnesota.
Loading...
or support indie stores by buying on