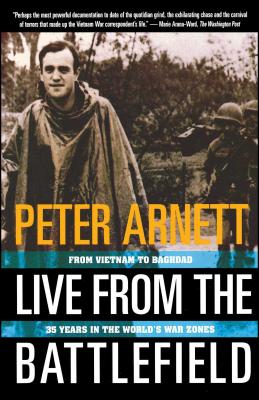 Live from the Battlefield

From his coverage of Vietnam, which won him a Pulitzer Prize, to his on-the-ground reporting of the Gulf War during one of the greatest airborne assaults in history, Peter Arnett has established himself as the leading voice of American war reportage.

In Live from the Battlefield, one of the most highly celebrated journalistic memoirs ever written, Peter Arnett gives us an engrossing account of the Vietnam era, as well as an indispensable portrait of battlefield reporting.

Peter Gregg Arnett is a journalist known for his coverage of the Vietnam War and the Gulf War. He was awarded the 1966 Pulitzer Prize in International Reporting for his work in Vietnam from 1962 to 1965, mostly reporting for the Associated Press. Arnett also worked for National Geographic magazine, and later for various television networks, most notably for nearly two decades at CNN.
Loading...
or support indie stores by buying on