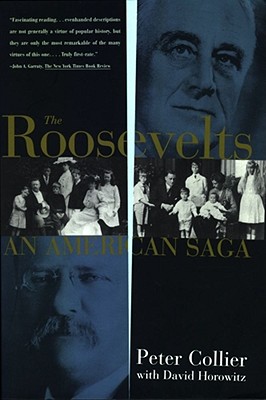 Drawing on extensive interviews and brimming with trenchant anecdotes, this historical portrait casts new light on the pivotal events and personalities that shaped the Roosevelt legacy—from Eleanor's often brutal relationship with her children and Theodore Jr.'s undoing in the 1924 New York gubernatorial race, to the heroism of Teddy's sons during both World Wars and FDR's loveless marriage.

The Roosevelts is a brilliant and controversial account of twentieth-century American political culture as seen through the lens of its preeminent political dynasty. Peter Collier shows how Theodore and Franklin Roosevelt, along with their descendants, scrambled to define the direction that American politics would take. The Oyster Bay clan, influenced by the flamboyant Teddy, was extroverted, eccentric, tradition-bound, and family-oriented. They represented an age of American innocence that would be replaced by Franklin's Hyde Park Roosevelts, who were aloof and cold yet individualistic and progressive.

The Roosevelts is history at its most penetrating, a crucial work that illuminates the foundations of contemporary, American politics.

Peter Collier is the author, along with David Horowitz, of The Rockefellers: An American Dynasty, The Kennedys: An American Dream, The Fords: An American Epic, and Destructive Generation: Second Thoughts About the Sixties. He also wrote Downriver: A Novel and The Fondas: A Hollywood Dynasty. He lives in Nevada City, California.

Praise For Roosevelts: An American Saga…

John A. Garraty The New York Times Book Review Fascinating reading...evenhanded descriptions are not generally a virtue of popular history, but they are only the most remarkable of the many virtues of this one....Truly first-rate.

Patrick Buchanan Engrossing...one comes to understand that Theodore Roosevelt belonged to an age that was dying, though he was perhaps its finest expression. And Franklin Delano Roosevelt, for all his character flaws, was perfectly suited to the new age that had begun.

Michael R. Beschloss THe Washington Monthly Collier and Horowitz have performed the extraordinary task of...deconstructing the densely packed array of ambitions, anxieties, responsibilities, traumas, and opportunities thrown on the rich and famous from birth.

Jonathan Yardley The Washington Post Book World As deftly organized, smoothly' written, and psychologically penetrating as any of its predecessors.

Burke Wilkinson The Washington Times The best page-turner of the season.
or
Not Currently Available for Direct Purchase
Copyright © 2020 American Booksellers Association