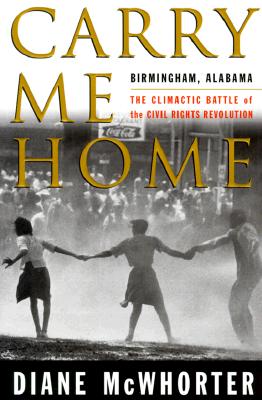 Birmingham, Alabama: The Climactic Battle of the Civil Rights Revolution

A major work of history, investigative journalism that breaks new ground, and personal memoir, "Carry Me Home" is a dramatic account of the civil rights era's climactic battle in Birmingham, as the movement led by Martin Luther King, Jr., brought down the institutions of segregation.

"The Year of Birmingham," 1963, was one of the most cataclysmic periods in America's long civil rights struggle. That spring, King's child demonstrators faced down Commissioner Bull Connor's police dogs and fire hoses in huge nonviolent marches for desegregation -- a spectacle that seemed to belong more in the Old Testament than in twentieth-century America. A few months later, Ku Klux Klansmen retaliated with dynamite, bombing the Sixteenth Street Baptist Church and killing four young black girls. Yet these shocking events also brought redemption: They transformed the halting civil rights movement into a national cause and inspired the Civil Rights Act of 1964, which abolished legal segregation once and for all.

Diane McWhorter, the daughter of a prominent white Birmingham family, brilliantly captures the opposing sides in this struggle for racial justice. Tracing the roots of the civil rights movement to the Old Left and its efforts to organize labor in the 1930s, "Carry Me Home" shows that the movement was a waning force in desperate need of a victory by the time King arrived in Birmingham. McWhorter describes the competition for primacy among the movement's leaders, especially between Fred Shuttlesworth, Birmingham's flamboyant preacher-activist, and the already world-famous King, who was ambivalent about the direct-action tactics Shuttlesworth had been practicing for years.

"Carry Me Home" isthe first major movement history to uncover the segregationist resistance. McWhorter charts the careers of the bombers back to the New Deal, when Klansmen were agents of the local iron and coal industrialists fighting organized labor. She reveals the strained and veiled collusion between Birmingham's wealthy establishment and its designated subordinates -- politicians, the police, and the Klan.

"Carry Me Home" is also the story of the author's family, which was on the wrong side of the civil rights revolution. McWhorter's quest to find out whether her eccentric father, the prodigal son of the white elite, was a member of the Klan mirrors the book's central revelation of collaboration between the city's Big Mules, who kept their hands clean, and the scruffy vigilantes who did the dirty work.

"Carry Me Home" is the product of years of research in FBI and police files and archives, and of hundreds of interviews, including conversations with Klansmen who belonged to the most violent klavern in America. John and Robert Kennedy, J. Edgar Hoover, George Wallace, Connor, King, and Shuttlesworth appear against the backdrop of the unforgettable events of the civil rights era -- the brutal beating of the Freedom Riders as the police stood by; King's great testament, his "Letter from Birmingham Jail"; and Wallace's defiant "stand in the schoolhouse door." This book is a classic work about this transforming period in American history.