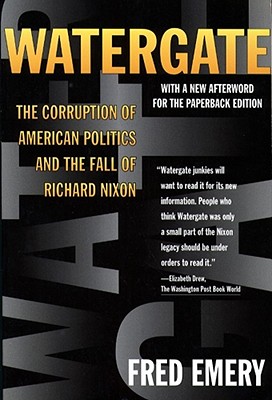 Featuring a new afterword, this fast-paced, clear, comprehensive account of the Watergate scandal contains new information about the scandal and probes the deep flaws of character that led to it.

Here is the definitive history of the Watergate scandal—based on the most recently released tapes, in-depth interview with many of the participants, and hundreds of official and unofficial documents, including notes Halderman omitted from his own published diaries.

In this fast-paced, hard-hitting narrative, Fred Emery illuminates as never before the confluence of improbable events, dramatic errors, quirks of fate, and profane character flaws that led to the Watergate scandal. The story begins in 1969. From the outset of his tenure in the White House, Nixon was obsessed with the fear of being a one-term president. Emery meticulously chronicles the path of Nixon’s slide into illegality that led from his initial approvals of wiretapping to leaks within his administration to the bungled attempts to plant bugs and copy documents in the offices of the Democratic National Committee in Washington’s huge Watergate complex and the desperate cover-up.

Emery’s comprehensive coverage and penetrating insights clear up many uncertainties that may still remain about the scandal and the extent of Nixon’s involvement. Authoritative and compelling, Watergate is essential reading for anyone who wants to fully understand this traumatizing episode in America’s history that challenged the integrity of its political system.