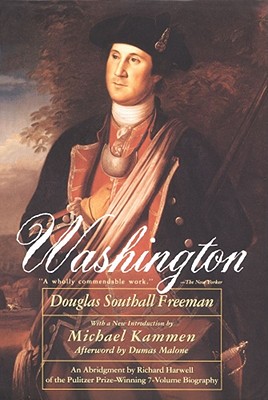 "Freeman's treatment of Washington as a Commander in Chief is virtually definitive" (The New York Times Book Review).

Washington is the most complete, definitive one-volume biography of George Washington ever written. In 1948 renowned biographer and military historian Douglas Southall Freeman won his second Pulitzer Prize for his new and dramatic reexamination of George Washington. For years biographies had gone from idolatry to muckraking in their depictions of this somewhat marbleized Founding Father. Freeman’s new interpretation was a fresh step, making Washington a living, breathing individual, flawed but heroic. An able commander who defeated the British Empire against incredible odds, Washington proved to be just as adept at wielding political power, and adroitly steered our new loosely called nation through the first stormy years of our unproven federal stewardship and the first two presidential administrations.

Here with an introduction by Pulitzer Prize winner Michael Kammen, who puts the writing and publication of Washington into perspective, and an afterword by Pulitzer Prize winner Dumas Malone, who explains the travails of Freeman’s grinding work, Washington is the most comprehensive biography available, and its value as an important classic has never been more evident.

Douglas Southall Freeman, the son of a Confederate soldier, was born in Lynchburg, Virginia, in 1886. He was commissioned to write a one-volume biography of Lee in 1915, but his research and writings over two decades produced four large volumes. Freeman won another Pulitzer Prize for his six-volume definitive biography of George Washington. He died in 1953.
Loading...
or support indie stores by buying on