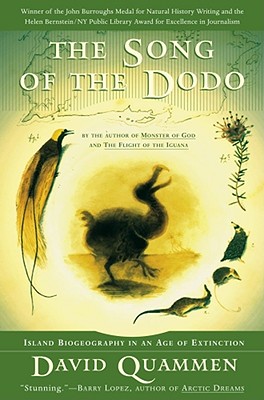 The Song of the Dodo

Island Biogeography in an Age of Extinctions

A brilliant, stirring work, breathtaking in its scope and far-reaching in its message, The Song of the Dodo is a crucial book in precarious times. Through personal observation, scientific theory, and history, David Quammen examines the mysteries of evolution and extinction and radically alters our understanding of the natural world and our place within it.

In this landmark of science writing, we learn how the isolation of islands makes them natural laboratories of evolutionary extravagance, as seen in the dragons of Komodo, the elephant birds of Madagascar, the giant tortoises of the Galapagos. But the dark message of island studies is that isolated ecosystems, whether natural or human-made, are also hotbeds of extinction. And as the world’s landscapes, from Tasmania to the Amazon to Yellowstone, are carved into pieces by human activity, the implications of this knowledge are more urgent than ever.

An unforgettable scientific adventure, a fascinating account of an eight-year journey of discovery, and a wake-up call for our time, David Quammen’s The Song of the Dodo is an exquisitely written book that takes the reader on a globe-circling tour of wild places and extraordinary ideas.

Praise For The Song of the Dodo: Island Biogeography in an Age of Extinctions…

“As close as science writing gets to a thrilling adventure yarn.” –Newsweek

David Quammen’s books include Breathless, The Tangled Tree, The Song of the Dodo, The Reluctant Mr. Darwin, and Spillover, a finalist for the National Book Critics Circle Award and recipient of the Premio Letterario Merck, in Rome. He has written for The New Yorker, Harper’s Magazine, The Atlantic, National Geographic, and Outside, among other magazines, and is a three-time winner of the National Magazine Award. Quammen shares a home in Bozeman, Montana, with his wife, Betsy Gaines Quammen, author of American Zion, and with two Russian wolfhounds, a cross-eyed cat, and a rescue python. Visit him at DavidQuammen.com.
Loading...
or support indie stores by buying on
(This book is on backorder)