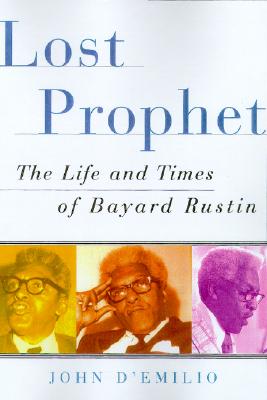 The Life and Times of Bayard Rustin

Bayard Rustin is one of the most important figures in the history of the American civil rights movement. Before Martin Luther King, before Malcolm X, Bayard Rustin was working to bring the cause to the forefront of America's consciousness. A teacher to King, an international apostle of peace, and the organizer of the famous 1963 March on Washington, he brought Gandhi's philosophy of nonviolence to America and helped launch the civil rights movement. Nonetheless, Rustin has been largely erased by history, in part because he was an African American homosexual. Acclaimed historian John D'Emilio tells the full and remarkable story of Rustin's intertwined lives: his pioneering and public person and his oblique and stigmatized private self.

It was in the tumultuous 1930s that Bayard Rustin came of age, getting his first lessons in politics through the Communist Party and the unrest of the Great Depression. A Quaker and a radical pacifist, he went to prison for refusing to serve in World War II, only to suffer a sexual scandal. His mentor, the great pacifist A. J. Muste, wrote to him, "You were capable of making the 'mistake' of thinking that you could be the leader in a revolution...at the same time that you were a weakling in an extreme degree and engaged in practices for which there was no justification."

Freed from prison after the war, Rustin threw himself into the early campaigns of the civil rights and anti-nuclear movements until an arrest for sodomy nearly destroyed his career. Many close colleagues and friends abandoned him. For years after, Rustin assumed a less public role even though his influence was everywhere. Rustin mentored a young and inexperienced Martin LutherKing in the use of nonviolence. He planned strategy for the Southern Christian Leadership Conference until Congressman Adam Clayton Powell threatened to spread a rumor that King and Rustin were lovers. Not until Rustin's crowning achievement as the organizer of the 1963 March on Washington would he finally emerge from the shadows that homophobia cast over his career. Rustin remained until his death in 1987 committed to the causes of world peace, racial equality, and economic justice.

Based on more than a decade of archival research and interviews with dozens of surviving friends and colleagues of Rustin's, "Lost Prophet" is a triumph. Rustin emerges as a hero of the black freedom struggle and a singularly important figure in the lost gay history of the mid-twentieth century. John D'Emilio's compelling narrative rescues a forgotten figure and brings alive a time of great hope and great tragedy in the not-so-distant past.