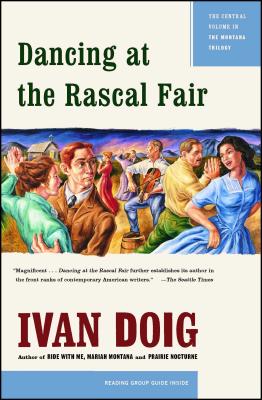 Dancing at the Rascal Fair

The central volume in Ivan Doig's acclaimed Montana trilogy, Dancing at the Rascal Fair is an authentic saga of the American experience at the turn of this century and a passionate, portrayal of the immigrants who dared to try new lives in the imposing Rocky Mountains.
Ivan Doig's supple tale of landseekers unfolds into a fateful contest of the heart between Anna Ramsay and Angus McCaskill, walled apart by their obligations as they and their stormy kith and kin vie to tame the brutal, beautiful Two Medicine country.

Praise For Dancing at the Rascal Fair…

Michael Dorris The Seattle Times Magnificent....Dancing at the Rascal Fair further establishes its author in the front ranks of contemporary American wrriters.

Henry Kaisor Chicago Sun-Times Doig's prose is so muscular and sculpted, so simple and purposeful that I can think only of Edward Hoagland and Wallace Stegner as Doig's equals.

Lee K. Abbott The New York Times Book Review Against this masterfully evoked backdrop. Mr. Doig addresses his real subject: love between friends, between the sexes, between the generations....His is a prose as tight as a new thread and as special as handmade candy....Dancing at the Rascal Fair races with real vigor and wit and passion.

Pamela Guillard San Francisco Chronicle Dazzling...I find myself filled With such high praise for this book that instead of relating paltry bits of it, I want to quote the whole glorious thing....Doig plunges right in and, while giving us a gorgeous story, simultaneously peels that tale back to expose, the nubbins of human despair -- injustice, failure, and that incalculable restlessness exemplifled by the immigrant.

Ivan Doig (1939-2015) was a third-generation Montanan and the author of sixteen books, including the classic memoir This House of Sky and most recently Last Bus to Wisdom. He was a National Book Award finalist and received the Wallace Stegner Award, among many other honors. Doig lived in Seattle with his wife, Carol. Visit IvanDoig.com.
or support indie stores by buying on