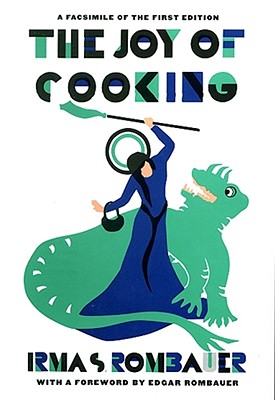 A Facsimile of the First Edition 1931

In 1931, Irma Rombauer announced that she intended to turn her personal collection of recipes and cooking techniques into a cookbook. Cooking could no longer remain a private passion for Irma. She had recently been widowed and needed to find a way to support her family. Irma was a celebrated St. Louis hostess who sensed that she was not alone in her need for a no-nonsense, practical resource in the kitchen. So, mustering what assets she had, she self-published The Joy of Cooking: A Compilation of Reliable Recipes with a Casual Culinary Chat. Out of these unlikely circumstances was born the most authoritative cookbook in America, the book your grandmother and mother probably learned to cook from. To date it has sold more than 15 million copies.
This is a perfect facsimile of that original 1931 edition. It is your chance to see where it all began. These pages amply reveal why The Joy of Cooking has become a legacy of learning and pleasure for generations of users. Irma's sensible, fearless approach to cooking and her reassuring voice offer both novice and experienced cooks everything they need to produce a crackling crust on roasts and bake the perfect cake. All the old classics are here -- Chicken a la King, Molded Cranberry Nut Salad, and Charlotte Russe to name a few -- but so are dozens of unexpected recipes such as Risotto and Roasted Spanish Onions, dishes that seem right at home on our tables today.
Whether she's discussing the colorful personality of her cook Marguerite, whose Cheese Custard Pie was not to be missed, or asserting that the average woman's breakfast was "probably fruit, dry toast, and a beverage" while the average man's was "fruit, cereal, eggs with ham or bacon, hot bread, and a beverage," the distinctive era in which Irma lived comes through loud and clear in every line. Enter a time when such dishes as Shrimp Wiggle and Cottage Pudding routinely appeared on tables across America.
The book is illustrated with the silhouette cutouts created by Irma's daughter Marion, who eventually wrote later editions of The Joy of Cooking. Marion also created the cover art depicting St. Martha of Bethany, the patron saint of cooking, slaying the dragon of kitchen drudgery. This special facsimile edition contains both Irma's original introduction and a completely new foreword by her son Edgar Rombauer, whose vivid memories bring Irma's kitchen alive for us all today.

Irma Rombauer self-published the first Joy of Cooking in 1931. In 1936, the first commercial edition was published by Bobbs-Merrill. Marion Rombauer Becker, Irma’s daughter, helped revise and update each subsequent edition until 1951. The 1963 edition was the first after Irma’s death and was completely Marion’s. Her son, Ethan Becker, helped Marion revise the 1975 edition, and then oversaw the 1997 and 75th Anniversary editions. Ethan’s son, John Becker and his wife, Megan Scott are the first of the family to be solely responsible for testing, revising, and updating the book since 1975, ensuring the latest edition is given the same love and attention to detail that made this culinary resource an American classic.
Loading...
or
Not Currently Available for Direct Purchase