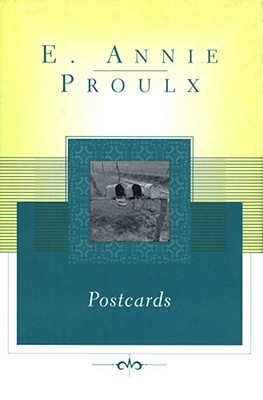 E. Annie Proulx's first novel, Postcards, winner of the 1993 Pen/Faulkner Award for Fiction, tells the mesmerizing tale of Loyal Blood, who misspends a lifetime running from a crime so terrible that it renders him forever incapable of touching a woman.
Blood's odyssey begins in 1944 and takes him across the country from his hardscrabble Vermont hill farm to New York, across Ohio, Minnesota, and Montana to British Columbia, on to North Dakota, Wyoming, and New Mexico and ends, today, in California, with Blood homeless and near mad. Along the way, he must live a hundred lives to survive, mining gold, growing beans, hunting fossils and trapping, prospecting for uranium, and ranching. In his absence, disaster befalls his family; greatest among their terrible losses are the hard-won values of endurance and pride that were the legacy of farm people rooted in generations of intimacy with soil, weather, plants, and seasons.
Postcards chronicles the lives of the rural and the dispossessed and charts their territory with the historical verisimilitude and writerly prowess of Cather, Dreiser, and Faulkner. It is a new American classic.

Annie Proulx is the author of eight books, including the novel The Shipping News and the story collection Close Range. Her many honors include a Pulitzer Prize, a National Book Award, the Irish Times International Fiction Prize, and a PEN/Faulkner award. Her story “Brokeback Mountain,” which originally appeared in The New Yorker, was made into an Academy Award-winning film. Her most recent novel is Barkskins. She lives in Seattle.
or
Not Currently Available for Direct Purchase
Copyright © 2020 American Booksellers Association