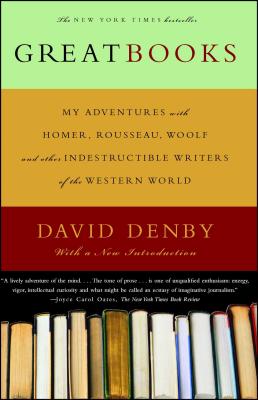 THE NATIONAL BESTSELLER
At the age of forty-eight, writer and film critic David Denby returned to Columbia University and re-enrolled in two core courses in Western civilization to confront the literary and philosophical masterpieces -- the "great books" -- that are now at the heart of the culture wars. In Great Books, he leads us on a glorious tour, a rediscovery and celebration of such authors as Homer and Boccaccio, Locke and Nietzsche. Conrad and Woolf. The resulting personal odyssey is an engaging blend of self-discovery, cultural commentary, reporting, criticism, and autobiography -- an inspiration for anyone in love with the written word.

Joyce Carol Oates The New York Times Book Review A lively adventure of the mind....The tone of the prose...is one of unqualified enthusiasm: energy, vigor, intellectual curiosity, and what might be called an ecstasy of imaginative journalism.

Jane Smiley Chicago Tribune Books He sustains a variety of tone, subject matter and approach that keeps Great Books alluring and readable throughout...I was torn between getting out a copy of the book he had just discussed and reading it and going on with Denby. In every case. I went on with Denby.

Tracy Kidder What Mr. Denby has written is a book filled with keen literary and social observation, which captures the excitement of exploration and discovery. This is a wonderful book.

David Denby has been film critic and staff writer at The New Yorker since 1998; prior to that he was film critic of New York magazine. His reviews and essays have also appeared in The New Republic, The Atlantic, and The New York Review of Books. He lives in New York City.
Loading...
or support indie stores by buying on