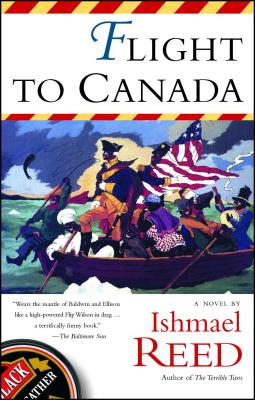 Three slaves infected with Dysaethesia Aethipica (a term coined in the nineteenth century for the disease that makes Negroes run away) escape from Virginia. Not satisfied with leaving slavery halfway, one of the trio has vowed to go the whole distance to Canada; his master, Arthur Swille, determined to recover his property, pursues, hot on Raven Quickskill’s trail.

With myth-bending ingenuity, Reed merges history, fantasy, political reality, and high comedy as he parodies the fugitive slave narrative: the slave-poet Quickskill flees to Canada on a nonstop jumbo jet; Abe Lincoln waltzes through slave quarters to the tune of “Hello Dolly”; the plantation mistress lies in bed watching the Beecher Hour on TV. Flight to Canada’s preposterous episodes leap out from the pages of history to reveal a keen sense of America past and present.

Ishmael Reed is the author of over twenty-five books including Mumbo Jumbo, Yellow Back Radio Broke-Down, Conjugating Hindi, Why No Confederate Statues in Mexico and most recently Why the Black Hole Sings the Blues and The Haunting of Lin-Manuel Miranda. He is also a publisher, television producer, songwriter, radio and television commentator, lecturer, and has long been devoted to exploring an alternative black aesthetic: the trickster tradition, or Neo-Hoodooism. A regular contributor to CounterPunch and founder of the Before Columbus Foundation, he taught at the University of California, Berkeley for over thirty years, retiring in 2005. Reed is the only person to be nominated for the National Book Award in two categories in the same year.
Loading...
or support indie stores by buying on