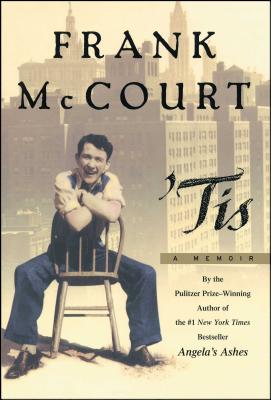 The #1 New York Times bestselling sequel to the beloved Pulitzer Prize-winning classic memoir, Angela’s Ashes, about McCourt’s coming of age as an immigrant in America.

Frank McCourt's glorious childhood memoir, Angela's Ashes, has been loved and celebrated by readers everywhere for its spirit, its wit and its profound humanity. A tale of redemption, in which storytelling itself is the source of salvation, it won the National Book Critics Circle Award, the Los Angeles Times Book Award and the Pulitzer Prize. Rarely has a book so swiftly found its place on the literary landscape.

And now we have 'Tis, the story of Frank's American journey from impoverished immigrant to brilliant teacher and raconteur. Frank lands in New York at age nineteen, in the company of a priest he meets on the boat. He gets a job at the Biltmore Hotel, where he immediately encounters the vivid hierarchies of this "classless country," and then is drafted into the army and is sent to Germany to train dogs and type reports. It is Frank's incomparable voice -- his uncanny humor and his astonishing ear for dialogue -- that renders these experiences spellbinding.

When Frank returns to America in 1953, he works on the docks, always resisting what everyone tells him, that men and women who have dreamed and toiled for years to get to America should "stick to their own kind" once they arrive. Somehow, Frank knows that he should be getting an education, and though he left school at fourteen, he talks his way into New York University. There, he falls in love with the quintessential Yankee, long-legged and blonde, and tries to live his dream. But it is not until he starts to teach -- and to write -- that Frank finds his place in the world. The same vulnerable but invincible spirit that captured the hearts of readers in Angela's Ashes comes of age.

As Malcolm Jones said in his Newsweek review of Angela's Ashes, "It is only the best storyteller who can so beguile his readers that he leaves them wanting more when he is done...and McCourt proves himself one of the very best." Frank McCourt's 'Tis is one of the most eagerly awaited books of our time, and it is a masterpiece.

Frank McCourt (1930–2009) was born in Brooklyn, New York, to Irish immigrant parents, grew up in Limerick, Ireland, and returned to America in 1949. For thirty years he taught in New York City high schools. His first book, Angela’s Ashes, won the Pulitzer Prize, the National Book Critics Circle Award, and the Los Angeles Times Book Award. In 2006, he won the prestigious Ellis Island Family Heritage Award for Exemplary Service in the Field of the Arts and the United Federation of Teachers John Dewey Award for Excellence in Education.
Loading...
or
Not Currently Available for Direct Purchase