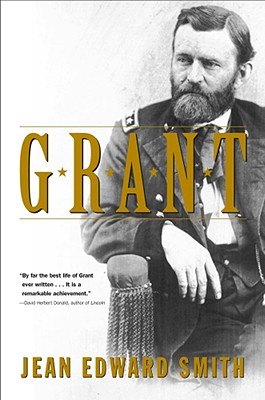 Ulysses S. Grant was the first four-star general in the history of the United States Army and the only president between Andrew Jackson and Woodrow Wilson to serve eight consecutive years in the White House. As general in chief, Grant revolutionized modern warfare. As president, he brought stability to the country after years of war and upheaval. Yet today Grant is remembered as a brilliant general but a failed president.

In this comprehensive biography, Jean Edward Smith reconciles these conflicting assessments of Grant's life. He argues convincingly that Grant is greatly underrated as a president. Following the turmoil of Andrew Johnson's administration, Grant guided the nation through the post-Civil War era, overseeing Reconstruction in the South and enforcing the freedoms of new African-American citizens. His presidential accomplishments were as considerable as his military victories, says Smith, for the same strength of character that made him successful on the battlefield also characterized his years in the White House.

Jean Edward Smith taught at the University of Toronto for thirty-five years, and at Marshall University for twelve. He was also a visiting scholar at Columbia, Princeton, and Georgetown. He is the author of Bush, a biography of the 43rd president; Eisenhower in War and Peace; FDR, winner of the 2008 Francis Parkman Prize of the Society of American Historians; Grant, a 2002 Pulitzer Prize finalist; and John Marshall: Definer of a Nation.

"In the ongoing positive reevaluation of Grant's career, this is the best full-scale biography to have appeared."
— James M. McPherson, Pulitzer Prize-winning author of Battle Cry of Freedom

"By far the best life of Grant ever written. . . . It is a remarkable achievement."
— David Herbert Donald, author of Lincoln