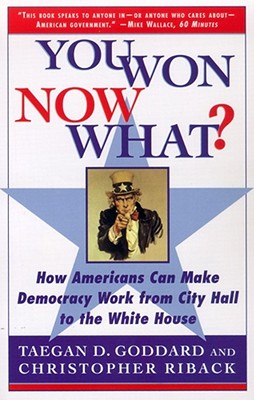 A COMMONSENSE ROAD MAP FOR MAKING OUR GOVERNMENT WORK
As public officials fail to deliver their campaign promises -- and voter cynicism skyrockets -- a simple explanation has become widely accepted: Government is broken. If only we could fix this system, voters hope, our democracy would work the way it was designed. But is government broken, or are the people we hire each Election Day not up to the job?
You Won -- Now What? turns the tables on the government-reform debate. The answer is not to reinvent government but to reinvent government officials.
Taegan D. Goddard and Christopher Riback use real-life stories to analyze the failures and successes of politicians from every level of government. Drawing on these examples, the authors identify the eight traits of effective public officials. These commonsense solutions prove that government is personal: good people can make a difficult system work. You Won -- Now What? explains to politicians and voters alike how government works -- and how it can work better.

Praise For You Won--Now What?: How Americans Can Make Democracy Work from City Hall to the White House…

Bill Bradley former United States Senator from New Jersey Goddard and Riback do a good job of analyzing American democracy and suggesting real world, practical suggestions to assist public officials. Their book should benefit all officeholders -- regardless of party and philosophy.

Joseph Lieberman U.S. Senator from Connecticut Whether you are working on the inside as a public official or on the outside as a political activist, this book promises to show the way towards achieving one's goals in the public sector.

Christine Todd Whitman Governor of New Jersey You Won -- Now What? will be a great help to newly elected public officials.

Forrest Sawyer ABC News You Won -- Now What? takes over where the voters finish. It addresses the most important, and often most ignored, aspects of government -- getting the job done.