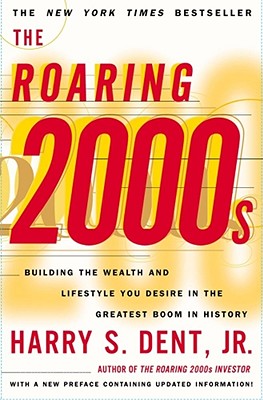 THE GREAT BOOM IS COMING
How and where we work and live is about to change drastically. In The Roaring 2000s, Harry S. Dent, Jr., one of the world's most prescient forecasters, turns his visionary eye to the full spectrum of possibilities that will follow in the wake of a burgeoning turn-of-the-century economy. Dent identifies opportunities, explores trends, and makes concrete predictions. Among them are:
A Dow that will reach at least 21,500 and possibly 35,000 by the year 2008
The rise of "gazelles," small- to medium-sized, high-growth companies that are now creating most of the jobs in the country
The Eight Critical Technology Trends Changing How We Live and Work
The New American Dream -- why changing technologies could mean a return to small-town living, and the nine types of boomtowns that will offer the highest quality of life
The New Network Corporation, which features leadership at the center rather than management from the top, and human browser teams that represent customers by connecting them directly to servers or specialized products and experts. These organizations are fast, responsive and entrepreneurial
The Seven Principles of Successful Investing
For anyone who wants to take advantage of these invaluable, emerging opportunities. The Roaring 2000s is a necessary guidebook to a not-so-distant future.

Harry S. Dent, Jr. is the president of the H.S. Dent Foundation, whose mission is "Helping People Understand Change." He is the founder of HS Dent, which publishes the HS Dent Forecast and oversees the HS Dent Financial Advisors Network. He is the author of the New York Times bestseller, The Great Depression Ahead, as well as of The Great Boom Ahead, in which he stood virtually alone in accurately forecasting the unanticipated "boom" of the 1990s. A Harvard MBA, Fortune 100 consultant, new venture investor, and noted speaker, Mr. Dent is a highly respected figure in his field.

Rodney Johnson is the president of HS Dent, an independent economic research and investment management firm. He oversees the daily operations of the companies and is a regular contributor to the HS Forecast and the HS Dent Perspective. A graduate of Georgetown University and Southern Methodist University, Mr. Johnson is a frequent guest on radio and television programs to discuss economic changes in the United States and around the world.
Loading...
or support indie stores by buying on