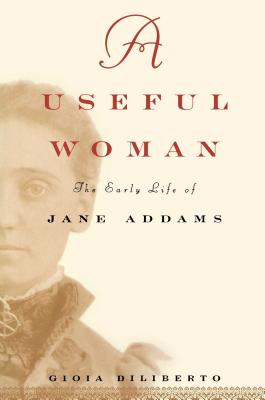 The Early Life of Jane Addams

The first biography in twenty-six years of Jane Addams -- founder of the Hull-House settlement and winner of the 1931 Nobel Peace Prize -- written with access to hundreds of new family documents.
"Today, Jane Addams is widely recognized as an extraordinary figure in our nation's history, one of a roster of great Americans -- Abraham Lincoln and Martin Luther King Jr. among them -- who made lasting contributions to social justice. But as with the lives of many iconographic figures, the legend often obscures the real story."
Frequently recognized as one of the most influential women of the century -- and considered a heroine by nurses and social workers around the globe -- Jane Addams had to struggle long and hard to earn her place in history. Born in 1860 on the eve of the Civil War, she lived during pivotal times when women were only beginning to create new roles for themselves (ironically building on the Victorian ideal of women as ministering angels).
Focusing on her metamorphosis from a frail, small-town girl into a woman who inspired hundreds of others to join her movement to serve the poor, A Useful Woman delves into the mysterious ailments and other troubles young Jane faced. Examining for the first time Jane's physical and mental health and the effect of her father's remarriage after her mother's death, biographer Gioia Diliberto directly links Addams's proneness to depression to her inability to conform to the mores of her time. Also, for the first time, she examines in detail Addams's two marriage-like relationships with women.
With hundreds of previously unavailable documents at her disposal, Diliberto has written a fascinating study of one of the most intriguing and important women in history, concentrating on her difficult formative years with compelling -- and groundbreaking -- results.

Praise For A Useful Woman: The Early Life of Jane Addams…

Alex Kotlowitz author of The Other Side of the River and There Are No Children Here Gioia Diliberto's A Useful Woman is both trenchant and sobering. A masterful storyteller, Diliberto introduces us to a Jane Addams who seems, well, so human, someone who struggled with her personal life as she battled the powers-that-be of the day. The gift of this book, though, is that Addams was indeed an American hero whose perspective on social inequities seems so relevant a century later.

Geraldine Ferraro former member of Congress A Useful Woman was not only an interesting read but was thought-provoking on a number of levels. Jane Addams was an exceptional woman who was torn between her desire to make a difference for others and the constraints that society forced on her as woman by the period in which she lived. That she overcame the latter with remarkable success is a fascinating story.

Studs Terkel author of The Good War and My American Century Here is not the mythic Jane Addams, but one of vulnerable flesh. A portrait of a woman of the late nineteenth century busting through the Victorian corset to become the social pioneer of the twentieth. An excellent study.

Blanche Wiesen Cook author of Eleanor Roosevelt, Volumes I and II, and Distinguished Professor at John Jay College and the Graduate Center, CUNY The early life of Jane Addams is a vivid and captivating read filled with new information. Everyone interested in women's history, a future of decency and justice, will be inspired by Gioia Diliberto's biography.

Reeve Lindbergh author of Under a Wing In Gioia Diliberto's charming and honest account of her life, work, and spirit, the formidable Jane Addams is restored to us as a real person: a fascinating, vulnerable, intelligent, funny, and above all, deeply principled human being.

Gioia Diliberto has written biographies of Jane Addams, Hadley Hemingway, and Brenda Frazier, as well as the critically acclaimed novels I Am Madame X and The Collection. She lives in the Hudson Valley with her family.
Loading...
or support indie stores by buying on