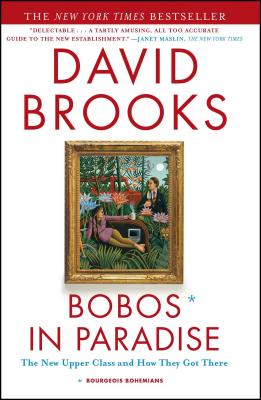 The New Upper Class and How They Got There

In his bestselling work of “comic sociology,” David Brooks coins a new word, Bobo, to describe today’s upper class—those who have wed the bourgeois world of capitalist enterprise to the hippie values of the bohemian counterculture. Their hybrid lifestyle is the atmosphere we breathe, and in this witty and serious look at the cultural consequences of the information age, Brooks has defined a new generation.

Do you believe that spending $15,000 on a media center is vulgar, but that spending $15,000 on a slate shower stall is a sign that you are at one with the Zenlike rhythms of nature? Do you work for one of those visionary software companies where people come to work wearing hiking boots and glacier glasses, as if a wall of ice were about to come sliding through the parking lot? If so, you might be a Bobo.

Praise For Bobos in Paradise: The New Upper Class and How They Got There…

Chris Tucker The Dallas Morning News Thanks to Brooks, bobos will join preppies, yuppies, and angry white males in the American lexicon.

Jonathan Yardley The Washington Post Perceptive and amusing. [Brooks] has identified the salient characteristics of this new elite, and he describes them with accuracy and wit.

David Brooks writes a biweekly Op-Ed column for The New York Times and appears regularly on PBS's The NewsHour with Jim Lehrer and NPR's All Things Considered. He lives in Bethesda, Maryland.
Loading...
or support indie stores by buying on