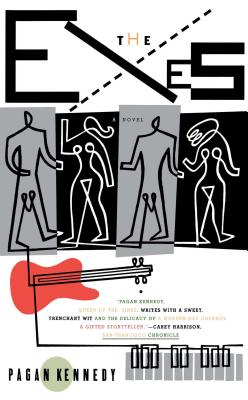 In one of the most critically acclaimed novels of recent years, Pagan Kennedy takes readers on a hip and hilarious tour of today's rock 'n' roll world. The Exes, an up-and-coming indie band, is made up of people who used to be lovers. Progressing from jam sessions in a basement to second-rate clubs to a cross-country tour that requires them to share seedy hotel rooms -- with their exes -- the four band members reveal their quirks, their problems, and their fantasies in alternating narratives.
Wickedly funny, realistic, and poignant, The Exes sheds a knowing light on the compromises and connections we all make in avid pursuit of our ambitions and dreams.

Praise For The Exes: A Novel…

Carey Harrison San Francisco Chronicle Pagan Kennedy, Queen of the 'Zines, writes with a sweet, trenchant wit and the delicacy of a modern-day Chekhov....a gifted storyteller.

Mark Athitakis Salon Magazine What Nick Hornby did for the insufferable record geek in High Fidelity, Kennedy does for the touring rock musician: makes him (and her) real and layered. [The Exes] offers a basic 4/4 beat, something you can groove to, but underneath is a lovely swirl of countermelodies and sounds that are unfamiliar, but engaging.

Stephen J. Dubner The New York Times You can't help falling for [Kennedy's] characters. Like rock and roll itself, they are both sloppy and eloquent, vulgar and earnest, dopey and poetic. The Exes is all those things, too -- and a lot more fun than dancing to architecture.

Chris Wright The Boston Phoenix A sexy, witty, giddy romp through the...alternative-music scene. [Kennedy] offers us some real insight into human nature, at least as it manifests itself in the young and the restless.

Cathi Hanauer Mademoiselle Pagan Kennedy is my new literary god. Not only can she write...but she also knows how to tell a great story. Kennedy's take on the indie music scene is both hilarious and real.