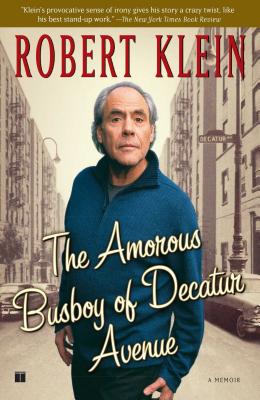 The Amorous Busboy of Decatur Avenue

A Child of the Fifties Looks Back

A funny and evocative coming-of-age memoir by Robert Klein, the beloved and award-winning comedian who has entertained audiences for more than four decades.

Best known for his unique brand of observational humor—seen on Broadway and in film and television—Klein details his life from ages nine to twenty-five as seen “through the gauze of time.” Klein’s theme park of memories alternates dark moments with sunlit humor. Teenage frustrations prompted a visit to a Harlem prostitute, which filled Klein with “shame and triumph and guilt.” He encountered individual and institutional anti-Semitism at Alfred University, yet led the frat house fun, moving on to the Yale School of Drama, Chicago’s Second City, New York theater and a variety of romances. Along the way, Klein had successes and failures, both in bed and on stage. Probing not only his own psyche but also the evolution of sexual mores during the 1950s and ‘60s, he unfurls an array of captivating anecdotes, writing with wry wit and honesty.

Praise For The Amorous Busboy of Decatur Avenue: A Child of the Fifties Looks Back…

"Klein has always been the funniest, most intelligent, coolest comedian. If he would also like to be known as an amorous busboy, who am I to stand in the way?"

"The book is moving and funny...Klein is a born storyteller."

"A warm and delightful Portrait of the Artist as a Young Comedian from the Bronx. Robert Klein writes with his signature intelligence, wit, and irreverence. This is a hilarious book, and surely Robert Klein is the Don Juan of Decatur Avenue."

"A fascinating, warm, and, of course, humorous account of Robert Klein's early years. I had no idea that he was such a sex addict!"

"Klein's provocative sense of irony gives his story a crazy twist, like his best stand-up work."

For more than forty years Robert Klein has entertained audiences. He has had an acclaimed career in comedy, on Broadway, on television, and in film. Born in the Bronx, he was a member of the famed Second City theatrical troupe in Chicago in the 1960s. Twice he was nominated for the Grammy Award for Best Comedy Album of the Year: Child of the Fifties (1973) and Mind Over Matter (1974). He received a Tony Award nomination for Best Actor and won a Los Angeles Drama Critics Circle Award for his performance in the hit Neil Simon musical They're Playing Our Song in 1979. In 1993, Klein won an Obie and the Outer Critics Circle Award for Outstanding Performance by an Actor in Wendy Wasserstein's The Sisters Rosensweig. In 1975, Klein was the first comedian to appear in a live concert on Home Box Office. He has done seven one-man shows for HBO. He was a star of the hit NBC series Sisters and has made more than 100 appearances on The Tonight Show and The Late Show with David Letterman. Notable films include Hooper, The Owl and the Pussycat, Two Weeks Notice, and How to Lose a Guy in 10 Days.
Loading...
or support indie stores by buying on