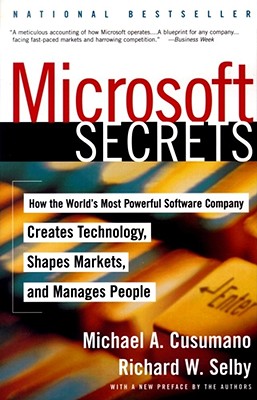 Today, Microsoft commands the high ground of the information superhighway by owning the operating systems and basic applications programs that run on the world's 170 million computers. Beyond the unquestioned genius and vision of Bill Gates, what accounts for Microsofts astounding success?
Drawing on almost two years of on-site observation at Microsoft headquarters, eminent scientists Michael A. Cusumano and Richard W. Selby reveal many of Microsoft's innermost secrets. This inside report, based on forty in-depth interviews by authors who had access to confidential documents and project data, outlines the seven complementary strategies that characterize exactly how Microsoft competes and operates, including the "Brain Trust" of talented employees and exceptional management; "bang for the buck" competitive strategies and clear organizational goals that produce self-critiquing, learning, and improving; a flexible, incremental approach to product development; and a relentless pursuit of future markets.
Cusumano and Selby's masterful analysis successfully uncovers the distinctive way in which Microsoft has combined all of the elements necessary to get to the top of an enormously important industry -- and stay there.

Peter Senge MIT Center For Organizational Learning, author of The Fifth Discipline Microsoft Secrets is a fascinating book about a fascinating company. What is surprising are the insights the authors developed into the interaction of culture, strategy, and process.

George Fisher Chairman, President, and CEO, Eastman Kodak Company Bill Gates is to computer software what George Eastman was to photography. Microsoft Secrets tells us how this dynamic company and its leader organize, compete, and win.

Michael A. Cusumano teaches strategy and technology managment at MIT's Sloan School of Management. He lives in Cambridge, Massachusetts.
Loading...
or support indie stores by buying on