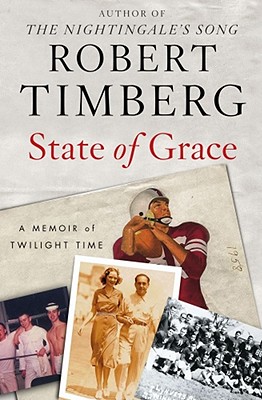 A Memoir of Twilight Time

From the author of the critically acclaimed The Nightingale's Song ("An amazing piece of work...This is a stunning book" -- Boston Globe), comes an evocative, elegiac and rollicking portrait of America.
The Nightingale's Song was Robert Timberg's extraordinary tale of well-intentioned but ill-starred warriors. In State of Grace, his long-awaited new book, he revives the powerful themes of courage, manhood and loss in a strikingly personal exploration of America between the Good War and Vietnam. "It was the twilight of innocence, or what passed for innocence if you didn't look too closely," he writes. "America was at peace, peering confidently into the future, when it should have been holding its breath for what lay ahead."
Robert Timberg has his finger on the pulse of a generation that split along a fault line called Vietnam, between those who went and those who didn't. In his unflinching and riveting The Nightingale's Song, Timberg chronicled a nation haunted by the war and its corrosive aftermath. Now, in State of Grace, the author rediscovers an earlier time and an America now largely lost.
Using the New York City sandlot football team he played for after high school as a rich metaphor for what was best about that bygone era, Timberg evokes the period in fine detail and vivid color. It was a world of girls, beer and the proverbial Big Game, but it also was defined by faith in tradition and institutions, including a still unsullied Catholic Church. State of Grace captures life on the threshold of Kennedy's Camelot, before the Beatles, before the Pill, but in the ever-expanding shadow of Vietnam, "a time when the path to an honorable future seemed as straightforward as playing hard, hitting clean, and not fumbling the ball."
The tale is told through Timberg's own eyes as he moves from troubled youth to man, from running back on a team called the Lynvets to Naval Academy plebe to Marine officer. The story is also told through a collection of other characters, including a genius of a coach overmatched when off the field, a driven quarterback sidetracked by booze and an angry loner fresh from the army stockade who reclaims his life on the gridiron. As Timberg writes, the team was where he and his fellow Lynvets "found a toe-hold on our better selves during a troubled time in our lives. Those snatches of pride and courage and strength we shared...eventually grew within us, becoming the core of a decent manhood that might have easily eluded any one of us in other circumstances. There were times, for each of us, when it was all we had."

Robert Timberg is the author of The Nightingale's Song and John McCain, An American Odyssey. He served with the First Marine Division in South Vietnam from March 1966 to February 1967. He has worked at The Baltimore Sun for three decades as a reporter, editor and White House correspondent. Currently deputy chief of the Sun's Washington bureau, he lives in Bethesda, Md.
or
Not Currently Available for Direct Purchase
Copyright © 2020 American Booksellers Association