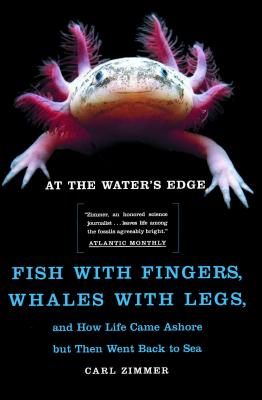 At the Water's Edge

Fish with Fingers, Whales with Legs, and How Life Came Ashore but Then Went Back to Sea

Everybody Out of the Pond
At the Water's Edge will change the way you think about your place in the world. The awesome journey of life's transformation from the first microbes 4 billion years ago to Homo sapiens today is an epic that we are only now beginning to grasp. Magnificent and bizarre, it is the story of how we got here, what we left behind, and what we brought with us.
We all know about evolution, but it still seems absurd that our ancestors were fish. Darwin's idea of natural selection was the key to solving generation-to-generation evolution -- microevolution -- but it could only point us toward a complete explanation, still to come, of the engines of macroevolution, the transformation of body shapes across millions of years. Now, drawing on the latest fossil discoveries and breakthrough scientific analysis, Carl Zimmer reveals how macroevolution works. Escorting us along the trail of discovery up to the current dramatic research in paleontology, ecology, genetics, and embryology, Zimmer shows how scientists today are unveiling the secrets of life that biologists struggled with two centuries ago.
In this book, you will find a dazzling, brash literary talent and a rigorous scientific sensibility gracefully brought together. Carl Zimmer provides a comprehensive, lucid, and authoritative answer to the mystery of how nature actually made itself.

Praise For At the Water's Edge: Fish with Fingers, Whales with Legs, and How Life Came Ashore but Then Went Back to Sea…

Michael S. Y. Lee Nature One of the most fascinating topics in biology....[Zimmer] clearly understands the diverse scientific issues involved, and cuts through the scientific jargon so anyone can comprehend them.

Philip Gingerich The New York Times Book Review Zimmer does a good job of explaining how profoundly different are the physiological and structural requirements of life in water compared to life on land.

Booklist A fascinating story, which Zimmer unfolds as a tale of high-stakes scientific sleuthing...thanks to marvelously lucid writing.

Publishers Weekly More than just an informative book about macroevolution itself, this is an entertaining history of ideas written with literary flair and technical rigor.

Ernst Mayr Museum of Comparative Zoology, Harvard University Zimmer is a born storyteller and succeeds in giving us pure pleasure while at the same time teaching us up-to-date science.

Kevin Padian Professor and Curator, Department of Integrative Biology and Museum of Paleontology, University of California, Berkeley Anyone with an interest in evolution should pick up this book to get on the cutting edge of discovery.

James Shreeve author of The Neandertal Enigma From the first page Carl sets his book apart by diving straight into the most neglected, least understood mystery of all: how wholly new body plans and parts could have been created by natural forces that at first glance would seem to work to destroy innovation. Macroevolution is adaptation without a net. Carl's lucid, often lovely prose is making me finally understand how a species could pull it off without plunging into extinction. He is also very deft at crafting quick-bear narrative out of the lives, inspirations, foibles and occasional dastardliness of the scientists who have pursued this question, both historically and in modern times. I fully expect that At the Water's Edge will do for macroevolution what Jon Weiner's The Beak of the Finch did for microevolution or David Quammen's The Song of the Dodo did for extinction. I'm sure the book is going to really soar.

Robert L. Carroll McGill University, author of Vertebrate Paleontology and Evolution Zimmer is an accomplished popularizer of scientific subjects. This book provides a strong basis for the public understanding of evolutionary patterns and processes

Peter Ward University of Washington, author of The End of Evolution This most compelling of evolutionary episodes is told with grace and style, Zimmer's book is a rock hammer blow to those who doubt that evolution is an understandable law of nature.