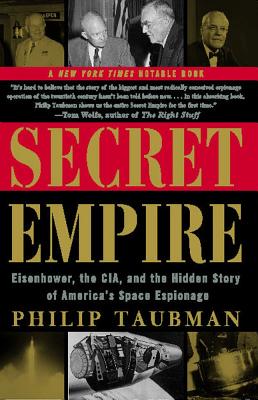 Eisenhower, the CIA, and the Hidden Story of America's Space Espionage

In a brief period of explosive, top-secret innovation during the 1950s, a small group of scientists, engineers, businessmen, and government officials rewrote the book on airplane design and led the nation into outer space. Led by President Dwight D. Eisenhower, they invented the U-2 and SR-71 spy planes and the first reconnaissance satellites that revolutionized spying, proved that the missile gap was a myth, and protected the United States from Soviet surprise nuclear attack. They also made possible the space-based mapping, communications, and targeting systems used in the Gulf War, Afghanistan, and Iraq.
Veteran New York Times reporter and editor Philip Taubman interviewed dozens of participants and mined thousands of previously classified documents to tell this hidden, far-reaching story. He reconstructs the crucial meetings, conversations, and decisions that inspired and guided the development of the spy plane and satellite projects during one of the most perilous periods in our history, a time when, as President Eisenhower said, the world seemed to be "racing toward catastrophe."
This is the story of these secret heroes, told in full for the first time.

Praise For Secret Empire: Eisenhower, the CIA, and the Hidden Story of America's Space Espionage…

Tom Wolfe Author of The Right Stuff It's hard to believe that the story of the biggest and most radically conceived espionage operation of the twentieth century hasn't been told before now....In this absorbing book, Philip Taubman shows us the entire Secret Empire for the first time.

Seymour Hersh Philip Taubman has written a book of pure pleasure -- a true adventure tale of good men doing good deeds for the good of the country at a time, in the 1950s, when America was united against the Evil Empire. It is also a story of a group of men who sped up the slow processes of science in the name of national security, and forever changed the way the world worked.

Los Angeles Times Taubman takes the subject further with newly declassified archival documents and interviews with pioneers who had previously been reluctant to talk. The result is a fascinating story of America's secret space race.

The Boston Globe Fans of Tom Clancy novels will doubtless be chagrined to discover that those who actually won the Cold War were not Harrison Ford look-alikes but studious engineers and physicists....Many of those who are the heroes of this tale...finally get their due in Taubman's book.