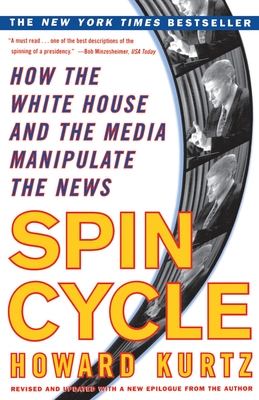 HOW THE WHITE HOUSE AND THE MEDIA MANIPULATE THE NEWS

Spin Cycle is the first behind-the-scenes account of the White House political operation as it packages and shapes the news by manipulating, misleading, and in some cases, intimidating the press. It is also the tale of how some of the nation's top journalists buy into these efforts and, often, put their own spin on the news.
Compelling, infuriating, often devastatingly funny, this is the story you should read before you pick up the newspaper tomorrow morning.

Howard Kurtz is the media reporter for The Washington Post, and also writes a weekly column for the newspaper and a daily blog for its website. He is also host of CNN's Reliable Sources, the longest-running media criticism show on television. His previous books include New York Times bestselling Spin Cycle: Inside the Clinton Propaganda Machine (1998) and The Fortune Tellers: Inside Wall Street's Game of Money, Media, and Manipulation (2000). His book Hot Air: All Talk All the Time (1996) was named by Business Week as one of the ten best business books of the year and Media Circus: The Trouble with America's Newspapers (1993) was chosen as the best recent book about the news media by American Journalism Review. Kurtz joined The Washington Post in 1981, and his work has appeared in Vanity Fair, Newsweek, New York, and other national magazines. He lives with his family in Chevy Chase, Maryland.

Praise For Spin Cycle: HOW THE WHITE HOUSE AND THE MEDIA MANIPULATE THE NEWS…

Pete Hamill Howard Kurtz takes us into the sick little world of obsessed, self-important, prosecutorial journalists and their opposing cadre of self-important, image-mongering White House flacks. From his solid reporting, we are reminded again of the way image and process have triumphed over political substance, and why so many millions of American have lost all interest in political news. Anybody who cares deeply about the future of this Republic should read this book, and tremble.

Mark Jurkowitz The Boston Globe In 300 nail-biting pages, Clinton's strategists and spinmasters are shown desperately scrambling and bailing to keep a torrent of scandals from sinking the battered ship of state....Spin Cycle provides an intimate view of the daily battles between the president and the media for control of the news.

Keith Schneider Detroit Free Press In Spin Cycle, Kurtz has written another winner...[he] does a masterful job describing the relentless and unseemly jockeying for professional advancement and public attention by journalists, the president's handlers, and the president himself.
or support indie stores by buying on
Copyright © 2020 American Booksellers Association