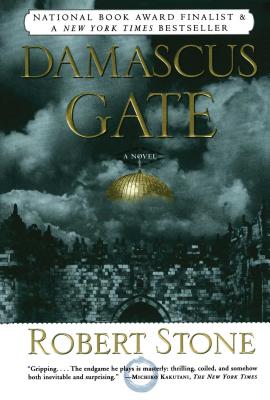 On the cusp of the millennium, Jerusalem has become a battleground in the race for redemption. American journalist Christopher Lucas is investigating religious fanatics when he discovers a plot to bomb the sacred Temple Mount. A violent confrontation in the Gaza Strip, a race through riot-filled streets, a cat-and-mouse game in an underground maze -- as Lucas follows his leads, he uncovers an attempt to seize political advantage that reveals duplicity and depravity on all sides of Jerusalem's sacred struggle.
Ambitious, passionate, darkly comic, Damascus Gate is not only Robert Stone's biggest and best novel to date, but a timely and brilliant story of belief, power, salvation, and apocalypse.

Gripping....The endgame he plays is masterly: thrilling, coiled, and somehow both inevitable and surprising.

A stunning novel by a great American author.

The definitive novel about Israel....Stone brings its tensions and dilemmas into characteristically sharp focus....Brims over with plots, subplots, and an impressive array of incisively drawn characters...the range of his knowledge is spectacular.

Not even his dedicated readers will be able to foresee the twists and impact of this new novel. Damascus Gate is a transcendent thriller.

He has faced his novel with the literary equivalent of Jerusalem stone, the luminous chiseled rock that lends authenticity to almost every building in Jerusalem....


Here is our masterpiece writer, Robert Stone, writing his book of books, his millennial novel of the millennial place....Here are Stone's most magnified, vivid, lunatic, and tender characters. Christopher Lucas engages us profoundly: a modest wit, who keeps faith in a faithless world....Damascus Gate is a narrative of good and evil written in letters of fire.


A major work in every aspect...bold and bracing, ambitious and inspired, Damascus Gate is...an astonishment.


Robert Stone is an explorer who takes his readers to the fractured edges of the known world. Damascus Gate is a triumph. Stone at the height of his powers.

Complex, brilliant...Damascus Gate keeps our attention riveted...fiction that combines the pleasure of a thriller with those of a novel of ideas.

Robert Stone is the author of A Flag for Sunrise, Children of Light, and Outerbridge Reach. He won the National Book Award for Dog Soldiers and the Faulkner Foundation Award for his first novel, A Hall of Mirrors. He lives with his wife in Connecticut
Loading...
or support indie stores by buying on