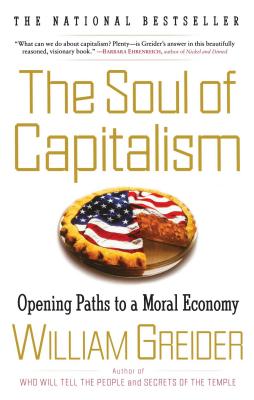 The Soul of Capitalism (Paperback)

Opening Paths to a Moral Economy

In his previous bestsellers, Who Will Tell the People and Secrets of the Temple, William Greider laid bare the inner workings of American politics and the Federal Reserve, revealing how they often work against the interests of the majority of us. In The Soul of Capitalism, Greider examines how the greatest wealth-creation engine in the history of the world is failing most of us, why it must be changed, and how specifically it can be transformed.
Brilliantly perceptive and sweeping in its ambition, The Soul of Capitalism is also hard-headed and practical, as Greider, one of our most eloquent populist spokesmen, assures us we are not powerless. He illustrates how American capitalism can be aligned more faithfully and obediently with what people want and need in their lives, with what American society needs for a healthy, balanced, and humane future. He proves that it is within our power to reinvent capitalism to make it work for us.
The Soul of Capitalism -- solid, pragmatic, visionary, optimistic -- addresses the nation's most urgent needs.

William Greider is the bestselling author of five previous books, including One World, Ready or Not (on the global economy), Who Will Tell the People (on American politics), and Secrets of the Temple (on the Federal Reserve). A reporter for forty years, he has written for The Washington Post and Rolling Stone and has been an on-air correspondent for six Frontline documentaries on PBS. Currently the national affairs correspondent for The Nation, he lives in Washington, D.C.

Praise For The Soul of Capitalism: Opening Paths to a Moral Economy…

John B. Judis The New York Times Book Review A bold and ambitious attempt to remedy the lack of vision that has plagued the American left since the decline of New Deal liberalism....For anyone interested in serious economic and social reform, Greider's effort is worth reading.

Andrew Leonard Salon.com Instead of simply saying capitalism is wrong, Greider is asking us how to make it more right. Above all, he is expressing a profound faith in the American character, in the restless curiosity and endless innovation inherent in the national fiber.

Vincent Boland FT Investor (Financial Times) Greider knows his economics and his markets. He is not an anti-capitalist. This makes his book persuasive.

Barbara Ehrenreich author of Nickel and Dimed What can we do about capitalism? Plenty -- is Greider's answer in this beautifully reasoned, visionary book.
or
Buy Here
Copyright © 2020 American Booksellers Association