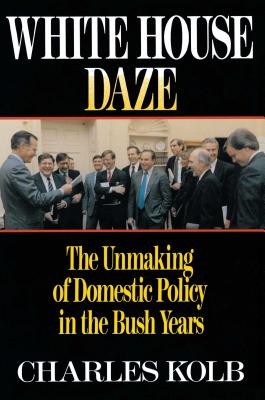 Throughout his presidency, George Bush was accused by both Republicans and Democrats of having an administration utterly without a domestic policy agenda. Kolb, who served as the President's Deputy Assistant for Domestic Policy, tried to push the Bush administration toward a more vigorous reform agenda. White House Daze is an often biting account of his efforts.

What happened to 'We are the Change' between 1988 and 1992? The answer to that question explains why George Bush was a one-term President.

During Bush’s term in office, the Party of new ideas had become the party of incumbency. Many Republicans now took for granted the "electoral lock", the Southern bloc, and Republican control of the executive branch. Their complacency was reinforced by the President's own high approval ratings through the first half of his term. Yet it's fair to say that for the first two years of the Bush Administration we were still spending down Ronald Reagan's inheritance. Even though the actual policies being implemented in many respects were really at odds with Reagan's core philosophy, the country had not woken up to the fact that under George Bush's stewardship federal spending (along with the deficit) was spiraling upward, taxes would start creeping up again, and regulatory policies would impose billions of dollars of new burdens on the public. This was 'change', alright, but the wrong kind of change.