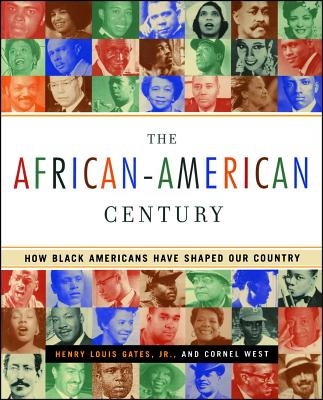 How Black Americans Have Shaped Our Country

One hundred original profiles of the most influential African Americans of the twentieth century.

Without Louis Armstrong or Miles Davis, we would not have jazz. Without Toni Morrison or Ralph Ellison, we would miss some of our greatest novels. Without Dr. King or Thurgood Marshall, we would be deprived of political breakthroughs that affirm and strengthen our democracy. Here, two of the leading African American scholars of our day, Henry Louis Gates, Jr., and Cornel West, show us why the twentieth century was the African American century, as they offer their personal picks of the African American figures who did the most to shape our world.

This colorful collection of personalities includes much-loved figures such as scientist George Washington Carver, contemporary favorites such as comedian Richard Pryor and novelist Alice Walker, and even less-well-known people such as aviator Bessie Coleman. Gates and West also recognize the achievements of controversial figures such as Nation of Islam leader Louis Farrakhan and rap artist Tupac Shakur. Lively, accessible, and illustrated throughout, The African American Century is a celebration of black achievement and a tribute to the black struggle for freedom in America that will inspire readers for years to come.

Cornel West is Alphonse Fletcher, Jr., University Professor of Harvard University. He is the author of many books including The American Evasion of Philosophy, The Future of Race (with Henry Louis Gates, Jr.) and the best-selling Race Matters. He won an American Book Award in 1993 for his multi-volume work Beyond Euro-centrism and Multiculturalism. He lives in Boston, Massachusetts.
Loading...
or support indie stores by buying on