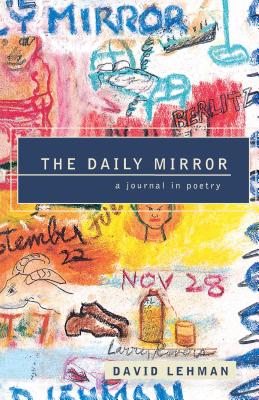 Following in the footsteps of such poets as Emily Dickinson, William Stafford, and Frank O'Hara, David Lehman began writing a poem a day in 1996 and found the experience so rewarding that he continued for the next two years. During that time, some of these poems appeared in various journals and on Web sites, including The Poetry Daily site, which ran thirty of Lehman's poems in as many days throughout the month of April 1998.
For The Daily Mirror, Lehman has selected the best of these "daily poems" -- each tied to a specific occasion or situation -- and telescoped two years into one. Spontaneous and immediate, but always finely crafted and spiced with Lehman's signature irony and wit, the poems are akin to journal entries charting the passing of time, the deaths of great men and women, the news of the day. Jazz, Sinatra, the weather, love, poetry and poets, movies, and New York City are among their recurring themes.
A departure from Lehman's previous work, this unique volume provides the intimacy of a diary, full of passion, sound, and fury, but with all the aesthetic pleasure of poetry. More a party of poems than a standard collection, The Daily Mirror presents an exciting new way to think about poetry.

Praise For The Daily Mirror…

Billy Collins Catullus said never a day without a line, but David Lehman has raised the stakes to a poem a day. The result is The Daily Mirror, a lively calendar of the life of a poet -- daily improvisations that are entertaining, touching, and always bubbling with the fizz of contemporary life.

James Tate The Daily Mirror is a spirited, poetic romp through the days -- sexy, energetic, jazzy, and just plain fun. Lehman has made this "daily poem" idea very much his own. This book is bursting with life. It's an irresistible force.

Yusef Komunyakaa The Daily Mirror reads like a sped-up meditation on the elemental stuff that we're made of: in this honed matrix of seeing, what's commonplace becomes the focus of extraordinary glimpses when these everyday images are juxtaposed into a mental geography made engaging by gazing into the daily mirror.

Carolyn Kizer I admit to being wildly envious of David Lehman's book. Imagine! A poem a day, and really good, charming, personal poems, too! Only the late William Stafford even came close to this accomplishment. Every place and person Lehman mentions is given a boost toward literary immortality.

Mark Strand I can think of no book of poems written in recent years that is nearly so entertaining as The Daily Mirror. It is the work of a quick mind unflustered by the Big Apple. Its wit is dazzling, its charm constant, its immediacy refreshing. It is, quite simply, a terrific read.