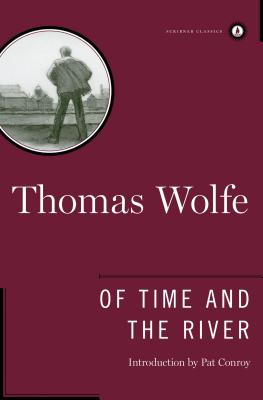 Of Time and the River (Hardcover)

A Legend of Man's Hunger in His Youth (Scribner Classics)

The sequel to Thomas Wolfe's remarkable first novel, Look Homeward, Angel, Of Time and the River is one of the great classics of American literature. The book chronicles the maturing of Wolfe's autobiographical character, Eugene Gant, in his desperate search for fulfillment, making his way from small-town North Carolina to the wider world of Harvard University, New York City, and Europe. In a massive, ambitious, and boldly passionate novel, Wolfe examines the passing of time and the nature of the creative process, as Gant slowly but ecstatically embraces the urban life, recognizing it as a necessary ordeal for the birth of his creative genius as a writer.
The work of an exceptionally expressive writer of fertile imagination and startling emotional intensity, Of Time and the River illuminates universal truths about art and life, city and country, past and present. It is a novel that is majestic and enduring. As P. M. Jack observed in The New York Times, "It is a triumphant demonstration that Thomas Wolfe has the stamina to produce a magnificent epic of American life."
This edition, published in celebration of Wolfe's centennial anniversary, contains a new introduction by Pat Conroy.