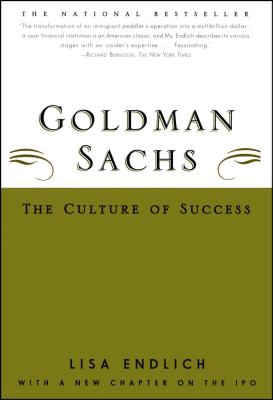 The Culture Of Success

Former Goldman Sachs Vice President Lisa Endlich draws on an insider’s knowledge to bring to life this unique company and the most stunning accomplishments in modern American finance.

The history, mystique, and remarkable success of Goldman Sachs, the world’s premier investment bank, are examined in unprecedented depth in this fascinating and authoritative study.

The firm’s spectacular ascent is traced in the context of its tenacious grip on its core values. Endlich shows how close client contact, teamwork, focus on long-term profitability rather than short-term opportunism, and the ability to recruit consistently some of the most talented people on Wall Street helped the firm generate a phenomenal $3 billion in pretax profits in 1997. And she describes in detail the monumental events of 1998 that shook Goldman Sachs and the financial world.

This is a rare and revealing look inside a great institution—the last private partnership on Wall Street—and inside the financial world at its highest levels.

Praise For Goldman Sachs: The Culture Of Success…

Richard Bernstein The New York Times The transformation of an immigrant peddler's operation into a multibillion-dollar-a-year financial institution is an American classic, and Ms. Endlich describes its various stages with an insider's expertise....Fascinating.

Roger Lowenstein The Wall Street Journal Goldman Sachs: The Culture of Success tells the story of Wall Street's last major partnership through the prism of this culture -- loyal, patient, rich, secretive and ultimately anachronistic....Lisa Endlich, formerly a foreign exchange trader at Goldman, is right to focus on the culture, because everything the firm did right flowed from its ethos of teamwork and from its studied patience.

James Surowiecki Newsday As the first meaningful look inside one of America's most important and least-known institutions, the book has the great virtue of being effectively a secret history.

Lisa Endlich holds master's degrees from MIT in management and in urban planning, and was a vice president and foreign exchange trader for Goldman Sachs. She was raised in Los Angeles and lives in England with her husband and their three children.
Loading...
or support indie stores by buying on