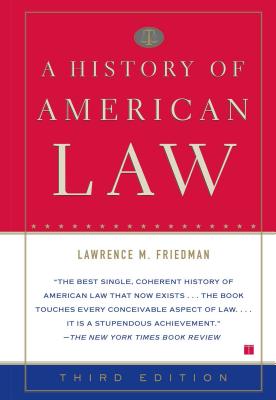 A History of American Law

In this brilliant and immensely readable book, Lawrence M. Friedman tells the whole fascinating story of American law from its beginnings in the colonies to the present day. By showing how close the life of the law is to the economic and political life of the country, he makes a complex subject understandable and engrossing. A History of American Law presents the achievements and failures of the American legal system in the context of America's commercial and working world, family practices, and attitudes toward property, government, crime, and justice.
Now completely revised and updated, this groundbreaking work incorporates new material regarding slavery, criminal justice, and twentieth-century law. For laymen and students alike, this remains the only comprehensive authoritative history of American law.

Praise For A History of American Law: Third Edition…

"A treasure for all Americans."
-- Stanford Law Review

"A matchless and unequaled primer for the novice, an invaluable reference source for the experienced scholar, and indeed, the first book that anyone possessing even a slight interest in American legal history should read."
-- The American Journal of Legal History

Lawrence M. Friedman was born in 1930, educated at the University of Chicago where he earned his law degree, and admitted to the Illinois bar in 1951. He received a graduate degree from the University of Chicago Law School in English legal history. After serving in the United States Army, he practiced with a law firm in Chicago and subsequently entered the teaching profession. He has taught at St. Louis University, the University of Wisconsin, and, since 1968, at Stanford University, where he is now Marion Rice Kirkwood Professor of Law. He is the author of Contract Law in America: A Social and Economic Case Study (1965); Government and Slum Housing: A Century of Frustration (1968); Law and the Behavioral Sciences (coeditor; 1969, 2nd edition, 1977); The Legal System: A Social Science Perspective (1975); Law and Society: An Introduction (1977); American Law and the Constitutional Order: Historical Perspectives (coeditor, 1978); Law and Social Change in Mediterranean Europe and Latin America (coeditor, 1979); The Roots of Justice: Crime and Punishment in Alameda County, California, 1870-1910 (coauthor, 1981); American Law (1984); Your Time Will Come (1985); and Total Justice (1985). He has contributed more than eighty articles to legal and associated journals. Professor Friedman is the past president of the Law and Society Association, and a past Fellow of the Center for Advanced Study in the Behavioral Sciences and of the Institute for Advanced Study in Berlin. He is a Fellow of the American Academy of Arts and Sciences, and the recipient of a number of awards for writing and teaching. He is married and has two daughters.
Loading...
or
Not Currently Available for Direct Purchase