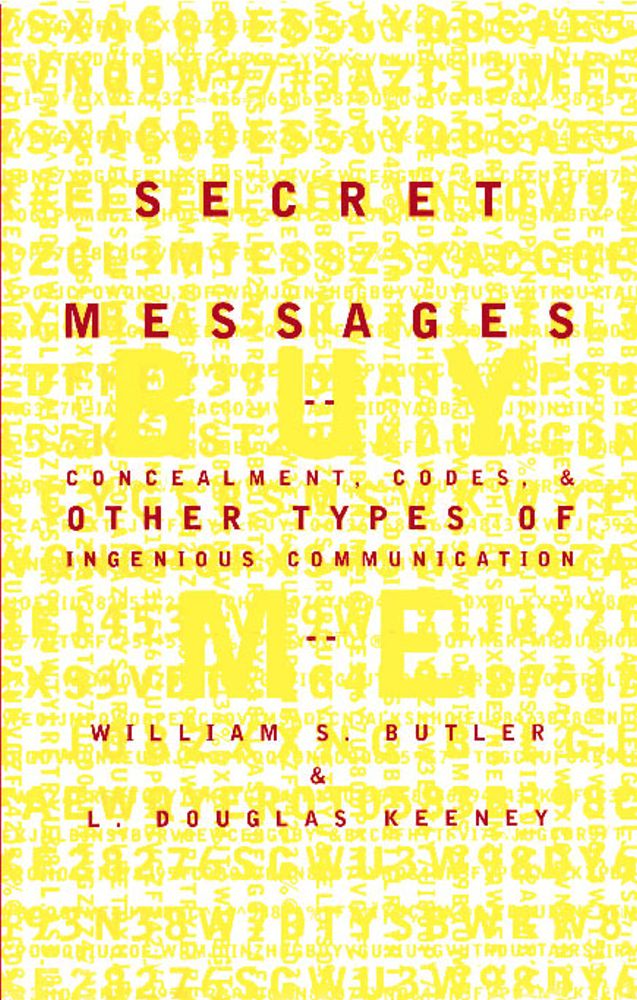 Concealment Codes and Other Types of Ingenious Communication

From the fall of Troy to interstellar messages by way of the Underground Railroad and Captain Midnight, Secret Messages is a collection of ninety-five of the most interesting examples of code and concealed communications throughout history.
Authors William S. Butler and L. Douglas Keeney have compiled a fascinating array of encrypted communications from a varied field. Many of these examples are from times of war, including the story of how a too simple code was the undoing of Benedict Arnold, and how Commander Jeremiah Denton blinked in Morse code to indicate that his North Vietnamese captors were torturing him. Others are more lighthearted, such as the creative use of hand signals by catchers and managers in modern baseball. And some selections offer a glimpse into how codes are used in everyday life, unbeknownst to most of us, in places like hospitals, police stations, and firehouses.
Uncovering hidden layers, Secret Messages will amaze you with its new insights into history and how it has been shaped by cryptography. It also explores the future of encryption, where technology will enable vast amounts of information to be hidden within minuscule hosts such as human DNA, or the dot of an i. Full of stories of human creativity and ingenuity, Secret Messages is an engaging book that will inspire and delight.

William S. Butler & L. Douglas Keeney have been a writing team for many years. Between them, they have authored more than a dozen books, many of them collaboratively. Their recent titles include This Is Guadalcanal; D-Day: Day of Destiny; No Easy Days; and Tragedy at Sea. They are both natives of and reside in Louisville, Kentucky, with their families.
or support indie stores by buying on