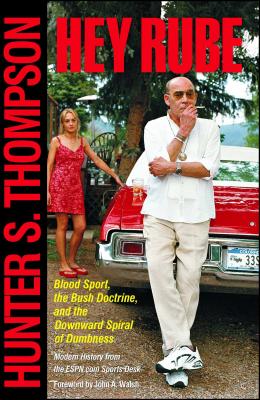 Blood Sport, the Bush Doctrine, and the Downward Spiral of Dumbness Modern History from the Sports Desk

Insightful, incendiary, outrageously brilliant, such was the man who galvanized American journalism with his radical ideas and gonzo tactics. For over half a century, Hunter S. Thompson devastated his readers with his acerbic wit and uncanny grasp of politics and history. His reign as "The Unabomber of contemporary letters" (Time) is more legendary than ever with Hey Rube. Fear, greed, and action abound in this hilarious, thought-provoking compilation as Thompson doles out searing indictments and uproarious rants while providing commentary on politics, sex, and sports—at times all in the same column.

With an enlightening foreword by ESPN executive editor John Walsh, critics' favorites, and never-before-published columns, Hey Rube follows Thompson through the beginning of the new century, revealing his queasiness over the 2000 election ("rigged and fixed from the start"); his take on professional sports (to improve Major League Baseball "eliminate the pitcher"); and his myriad controversial opinions and brutally honest observations on issues plaguing America―including the Bush administration and the inequities within the American judicial system.

Hey Rube gives us a lasting look at the gonzo journalist in his most organic form―unbridled, astute, and irreverent.

Praise For Hey Rube: Blood Sport, the Bush Doctrine, and the Downward Spiral of Dumbness Modern History from the Sports Desk…

"Punctuated by moments of brilliant iconoclasm, as well as profound questions for our age."
-- San Francisco Chronicle

"Thompson is a genuinely unique figure in American journalism, a superb comic writer and a ferociously outspoken social and political critic."
-- The Washington Post

"You can't help but be glad that when it all hit the fan, Hunter S. Thompson was working the Sports Desk."
-- The New York Sun

"This compilation...has fear and loathing in it, of course, but beneath its ornery doomsday facade is a message of hope: What happens in the stadiums and field houses of America is probably beyond your control, but what happens in the city councils and statehouses is up to you."
-- Playboy

Hunter S. Thompson was born and raised in Louisville, Kentucky. His books include Hell's Angels, Fear and Loathing at Rolling Stone, Fear and Loathing on the Campaign Trail '72, The Rum Diary, and Better than Sex. He died in February 2005.
Loading...
or support indie stores by buying on