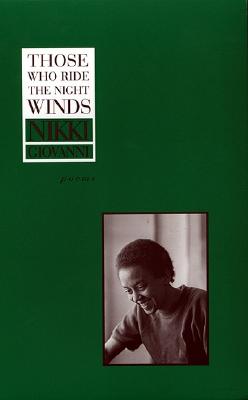 Those Who Ride the Night Winds (Paperback)

Nikki Giovanni, long known as "the Princess of Black Poetry," dedicates Those Who Ride the Night Winds to "the day trippers and midnight cowboys," the ones who have devoted their lives to pushing the limits of the human condition and who have shattered the constraints of the status quo to live life as a "marvelous, transitory adventure." Included are poems about John Lennon, Martin Luther King, Jr., and Robert Kennedy, as well as friends, lovers, mothers, and the poet herself. With reverence for the ordinary and in search of the extraordinary, Those Who Ride the Night Winds is Nikki Giovanni's most accessible collection ever. She displays her passion for and connectedness to the people and places that touch her. The reissue of Nikki Giovanni's seminal 1984 collection will once again enchant those who have always loved her poems--and those who are just getting to know her work.

As a witness to three generations, Nikki Giovanni has perceptively and poetically recorded her observations of both the outside world and the gentle yet enigmatic territory of the self. When her poems first emerged from the civil rights and Black Power movements in the late 1960s, she immediately became a celebrated and controversial figure. Written in one of the most commanding voices to grace America's political and poetic landscape at the end of the twentieth century, Nikki Giovanni's poems embody the fearless passion and spirited wit for which she is beloved and revered.

Nikki Giovanni is our most widely read living black poet, and in her most accessible collection to date, we become aware of the poet as a human being we can relate to, someone affected by and concerned with events. The title of this collection refers to people who have tried to make changes, people who have gone against the tide, people who were unafraid to test their wings. Included are poems about John Lennon, Billie Jean King, Martin Luther King, Jr., and Robert Kennedy. There are poems about friends, lovers, mothers, and about the poet herself.

Long known as the "Princess of Black Poetry," Nikki Giovanni is as alive and vibrant as ever. Her many readers will find once again in this collection the warmth, wit, passion, and caring about people that have always distinguished her work. Strong, direct, tremendously energetic, visionary, vulnerable, and real, these poems reveal a great spirit among us; a woman in her human dimension; a person all readers can identify with and believe in.

Nikki Giovanni, poet, activist, mother, and professor, is a seven-time NAACP Image Award winner and the first recipient of the Rosa Parks Woman of Courage Award, and holds the Langston Hughes Medal for Outstanding Poetry, among many other honors. The author of twenty-eight books and a Grammy nominee for The Nikki Giovanni Poetry Collection, she is the University Distinguished Professor of English at Virginia Tech in Blacksburg, Virginia.