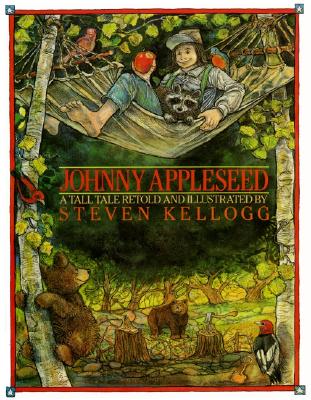 Born in Massachusetts during the Revolutionary War, John headed west as soon as he was able. Along the way, he cleared land and planted orchards so he could supply apples to settlers he knew would follow. When the settlers did arrive, John befriended them, often giving away his trees. Soon he became known as Johnny Appleseed.

Legends about him spread quickly: It was said that he slept in a treetop hammock, that he had a pet wolf, that he played with a bear family. Everyone seemed to know a story about Johnny Appleseed. And even today people claim to have seen him.

In vivid prose and magnificent pictures that spring off the pages, Steven Kellogg tells the lively story of a true American hero.