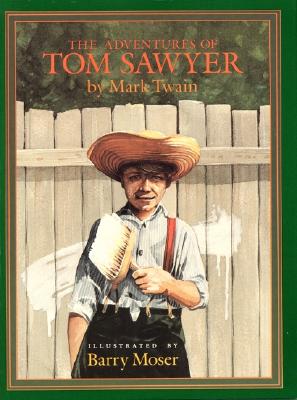 The Adventures of Tom Sawyer

Here is one of the great American novels, illustrated by one of this country's most distinguished artists.

Readers will enjoy the antics of that irrepressible boy-hero, Tom, who lies to his Aunt Polly and still is forgiven, wins the heart of Becky Thatcher by getting whipped at school, gets out of whitewashing a fence by tricking his friends into doing it, and has dangerous adventures with his sidekick Huckleberry Finn but emerges unscathed.

Mark Twain, who was born Samuel L. Clemens in Missouri in 1835, wrote some of the most enduring works of literature in the English language, including The Adventures of Tom Sawyer and The Adventures of Huckleberry Finn. Personal Recollections of Joan of Arc was his last completed book—and, by his own estimate, his best. Its acquisition by Harper & Brothers allowed Twain to stave off bankruptcy. He died in 1910.

Barry Moser is the prizewinning illustrator and designer of more than three hundred books for children and adults. He is widely celebrated for his dramatic wood engravings for the only twentieth-century edition of the entire King James Bible illustrated by a single artist. He lives in western Massachusetts.

Peter Glassman is the owner of Books of Wonder, the New York City bookstore and publisher specializing in new and old imaginative books for children. He is also the editor of the Books of Wonder Classics, a series of deluxe facsimiles and newly illustrated editions of timeless tales. And he is the author of The Wizard Next Door, illustrated by Steven Kellogg. Mr. Glassman lives in New York City.
Loading...
or
Not Currently Available for Direct Purchase