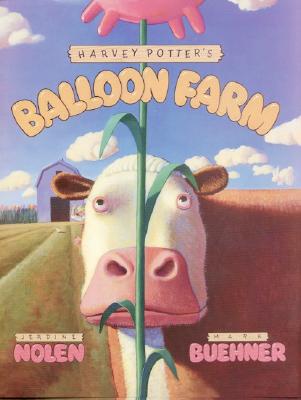 Harvey Potter was a very strange fellow indeed. He was a farmer, but he didn't farm like my daddy did. He farmed a genuine, U.S. Government Inspected Balloon Farm.

So begins this enchanting original tall tale. Set in the rural south and populated with a truly unforgettable cast of characters--including, if you look very carefully, a rabbit, a Tyrannosaurus rex, a cat, a chicken, a cow, and a pig hidden in each remarkable illustration--this is a book that is filled with wonderful impossibilities and magical imagination. Told in the great tradition of summer nights and front porch yarns, Harvey Potter's Balloon Farm will lift your spirit right off the ground, just as it does Harvey Potter.