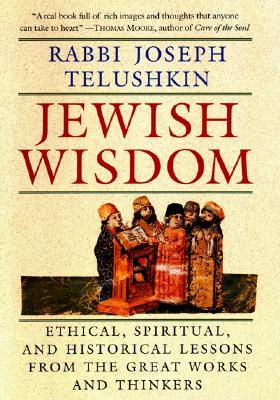 What do the great Jewish writings of the last 3,500 years tell us about these and all other vital questions about our lives? Rabbi Joseph Telushkin has devoted his life to the search for answers within the teachings of Judaism. In Jewish Wisdom, Rabbi Telushkin, the author of the highly acclaimed Jewish Literacy, weaves together a tapestry of stories from the Bible and Talmud, and the insights of Jewish commentators and writers from Maimonides, Rashi, and Hillel to Einstein, Isaac Bashevis Singer, and Elie Wiesel. A richer source of crucial life lessons would be hard to imagine.

Accompanying this extraordinary compilation is Teluslikins compelling commentary, which reveals how these texts continue to instruct and challenge Jewsand all people concerned with leading ethical livestoday As he discusses these texts, Rabbi Telushkin addresses issues of fundamental interest to modern readers: how to live with honesty and integrity in an often dishonest world; how to care for the sick and dying; how to teach children to respect both themselves

and others, how to understand and confront such great tragedies as antisemitism. and the Holocaust; what God wants from humankind. Within Jewish Wisdom's ninety chapters the reader will find extended sections illuminating Jewish perspectives on sex, romance, and marriage, what kind of belief in God a Jew can have after the Holocaust, how to use language ethically, the conflicting views of the Bible and Talmud on the death penalty, and much, much more.

Jewish Wisdom adds a new dimension to the many widely read contemporary books that retell the stones and reveal the essence of classic religious and secular literature. Possibly the most far-ranging volume of stories and quotations from Jewish texts, Jewish Wisdom will itself become a classic, a book that not only has the capacity to transform how you view the world, but one that well might change how you choose to live your life.

Joseph Telushkin is a rabbi, scholar, and bestselling author of eighteen books, among them A Code of Jewish Ethics and Words That Hurt, Words That Heal. His book Jewish Literacy is the widest-selling work on the topic of Judaism. He lives with his wife, Dvorah, in New York City, and lectures regularly throughout the United States.